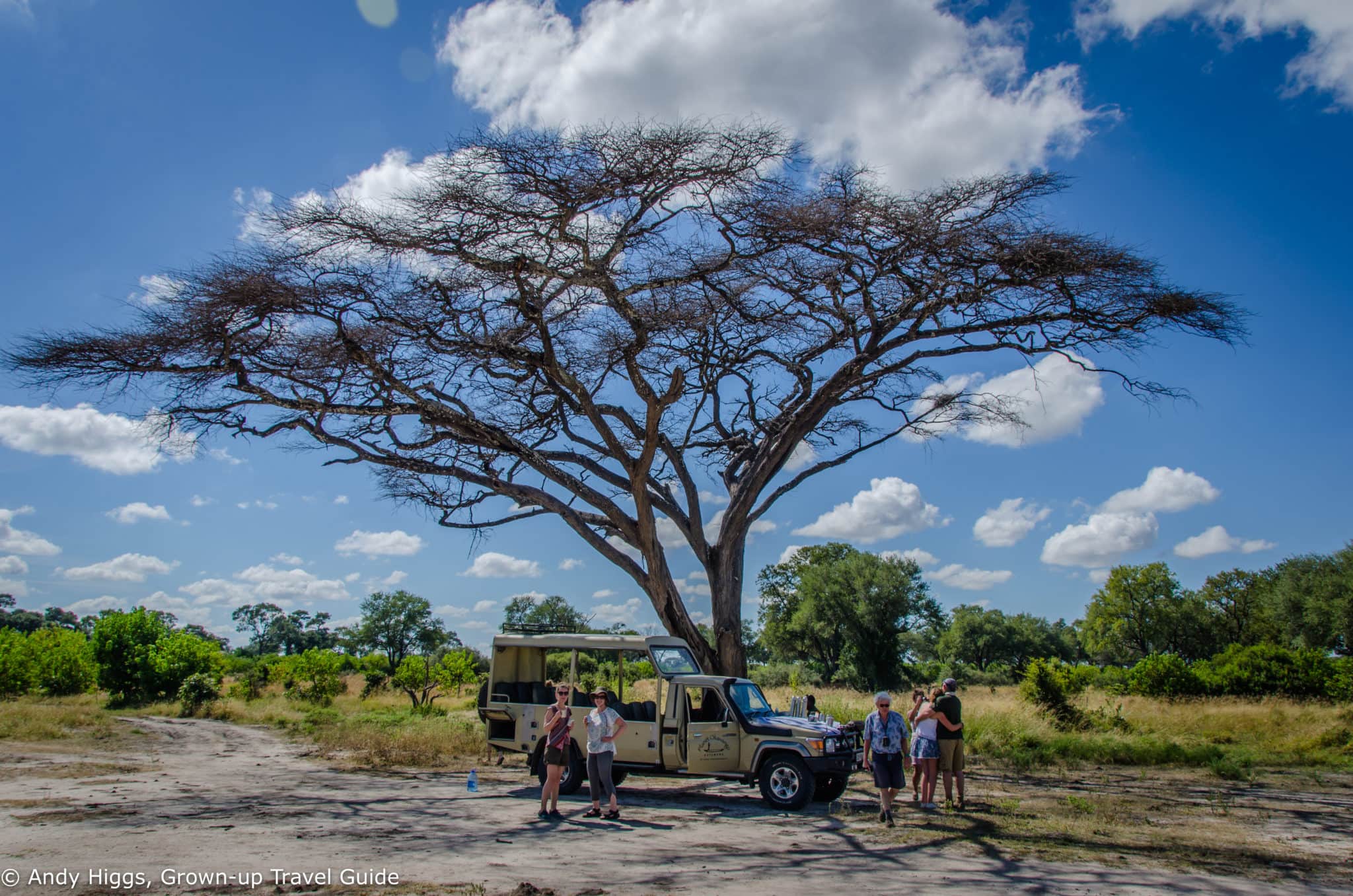 Moremi is one of the best places in Africa for spotting wildlife, with a high density of animals. A particular advantage is that the wildlife in Moremi are generally relaxed, which means that game vehicles can get closer than is the case in many other national parks and reserves. The reserve offers a beautiful, varied and green landscape featuring lakes, rivers, flood plains and forest.

Moremi has a long and prestigious history. It was the first reserve in Africa to be established by local residents. Uncontrolled hunting and cattle encroachment was causing the rapid depletion of wildlife in the ancestral lands of the Batawana people of Ngamiland. Under the leadership of the late Chief Moremi III’s wife, Mrs. Moremi, they took the bold initiative to proclaim Moremi a game reserve in 1963.

Moremi protects the heart of the Okavango Delta – approximately one third of its area. While there are several safari camps within this area, the majority of accommodation lies outside Moremi in private wildlife reserves.

Some parts of Moremi can be accessed by vehicle while others can only be reached by air.

It is the only officially protected area of the Okavango Delta, and as such is of tremendous scientific, environmental and conservation importance.

Voted the ‘best game reserve in Africa’ by the prestigious African Travel and Tourism Association at South Africa’s premier tourism fair, Indaba, in 2008 – Moremi is regarded by many as one of the most beautiful reserves in Africa, possibly in the world. 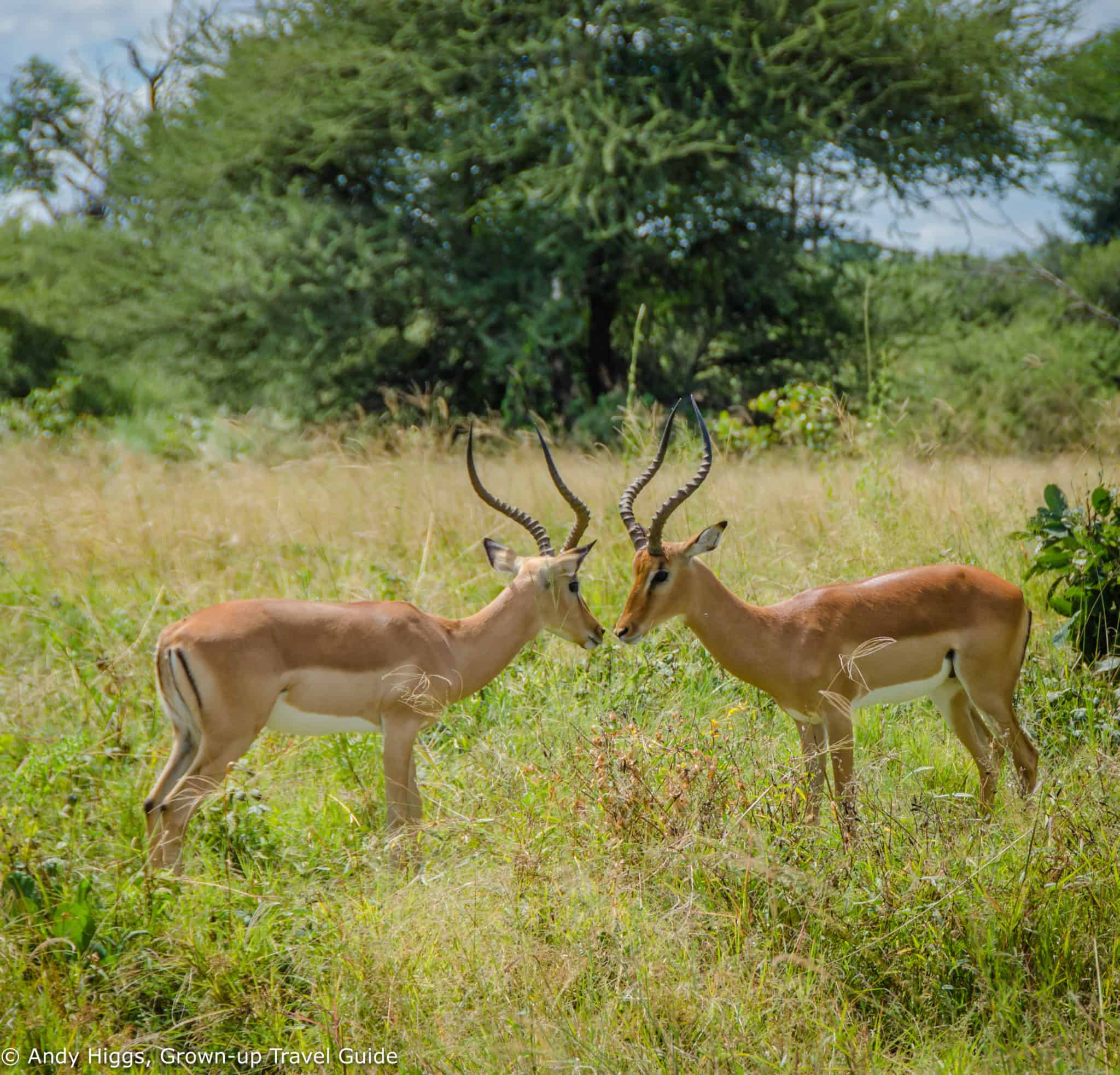 I first visited Moremi in 2015 and absolutely loved the experience, and then returned in 2017 with my family on our Botswana tour. On the latter occasion we had a full three days in the reserve and our group found it to be the highlight of the trip.

Moremi Game Reserve and is home to all major naturally occurring herbivore and carnivore species in the region, and over 400 species of birds, many migratory and some endangered. Furthermore, both Black and White Rhino have recently been re-introduced to the reserve. 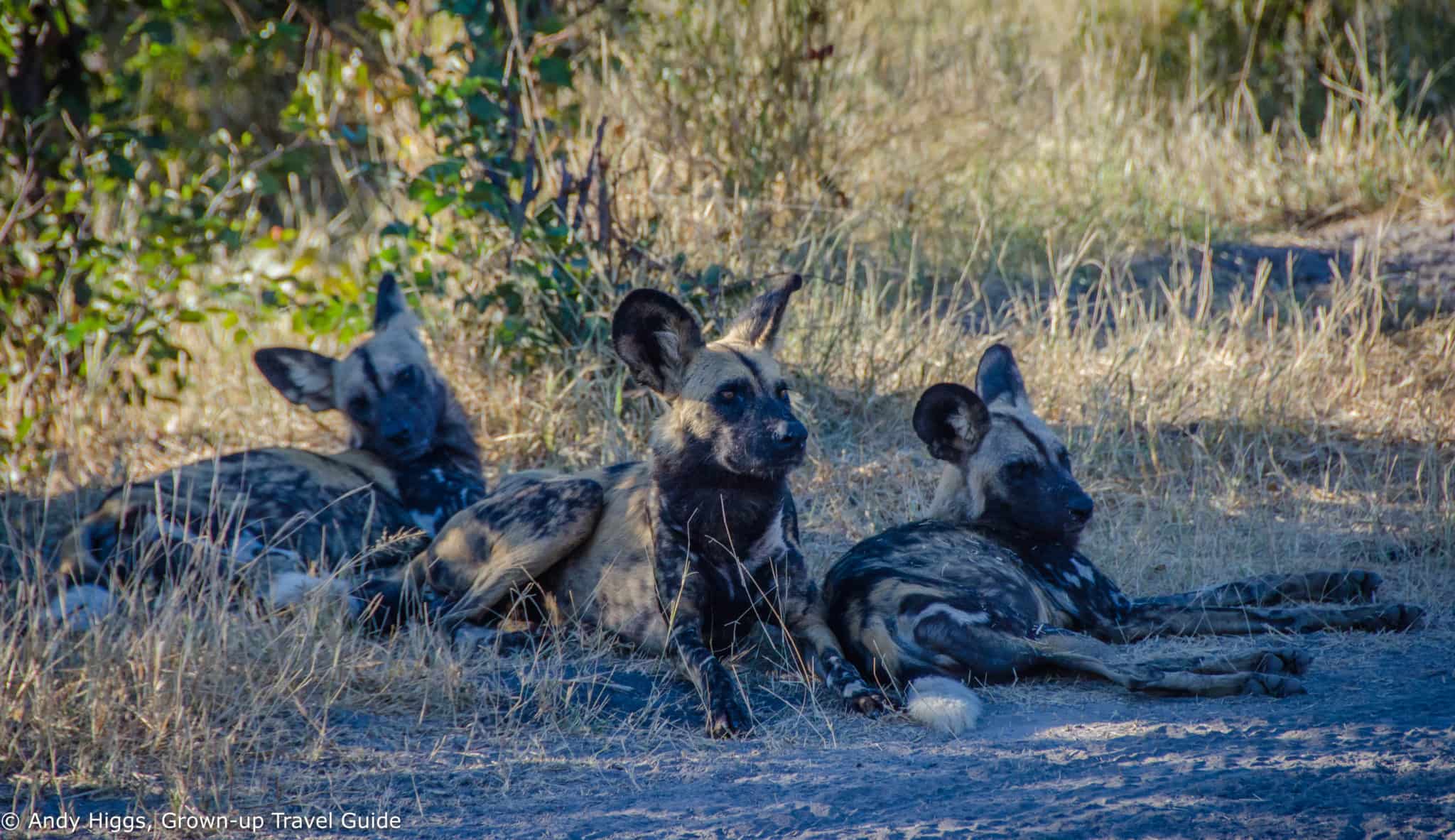 In 2017 we were inredibly lucky to spend time in the company of some wild dogs (also known as painted dogs and painted wolves) which were high on my wish-list after several safaris without spotting them.

They did, however, behave quite badly considering they had an audience. Or perhaps that was their way to get us to move on… 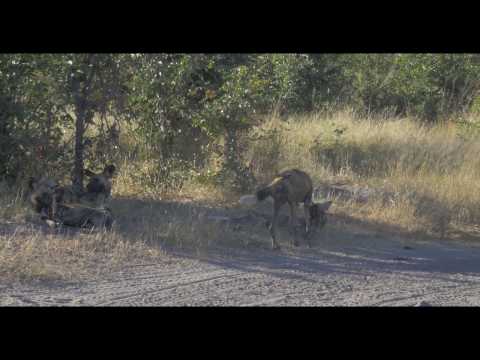 On both occasions we saw a huge range of animals both large and small, and more birds than I can remember. 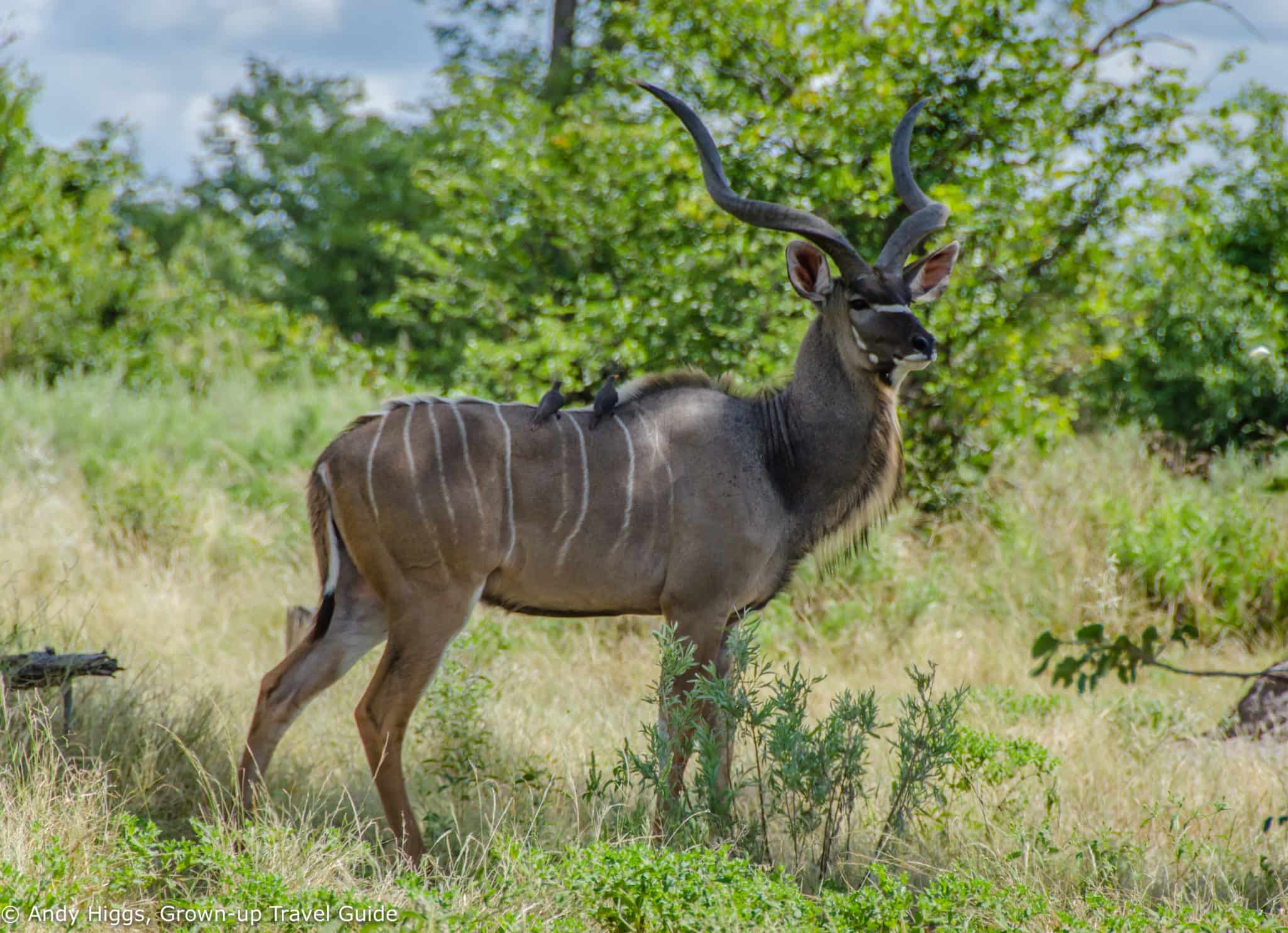 Kudu are one of my favourites; and this was a prime example. In Kenya it was often hard to get close to Kudu as they are very skittish due to being hunted. In Moremi this was not an issue, as you can see from the picture above, shot with minimal use of zoom. 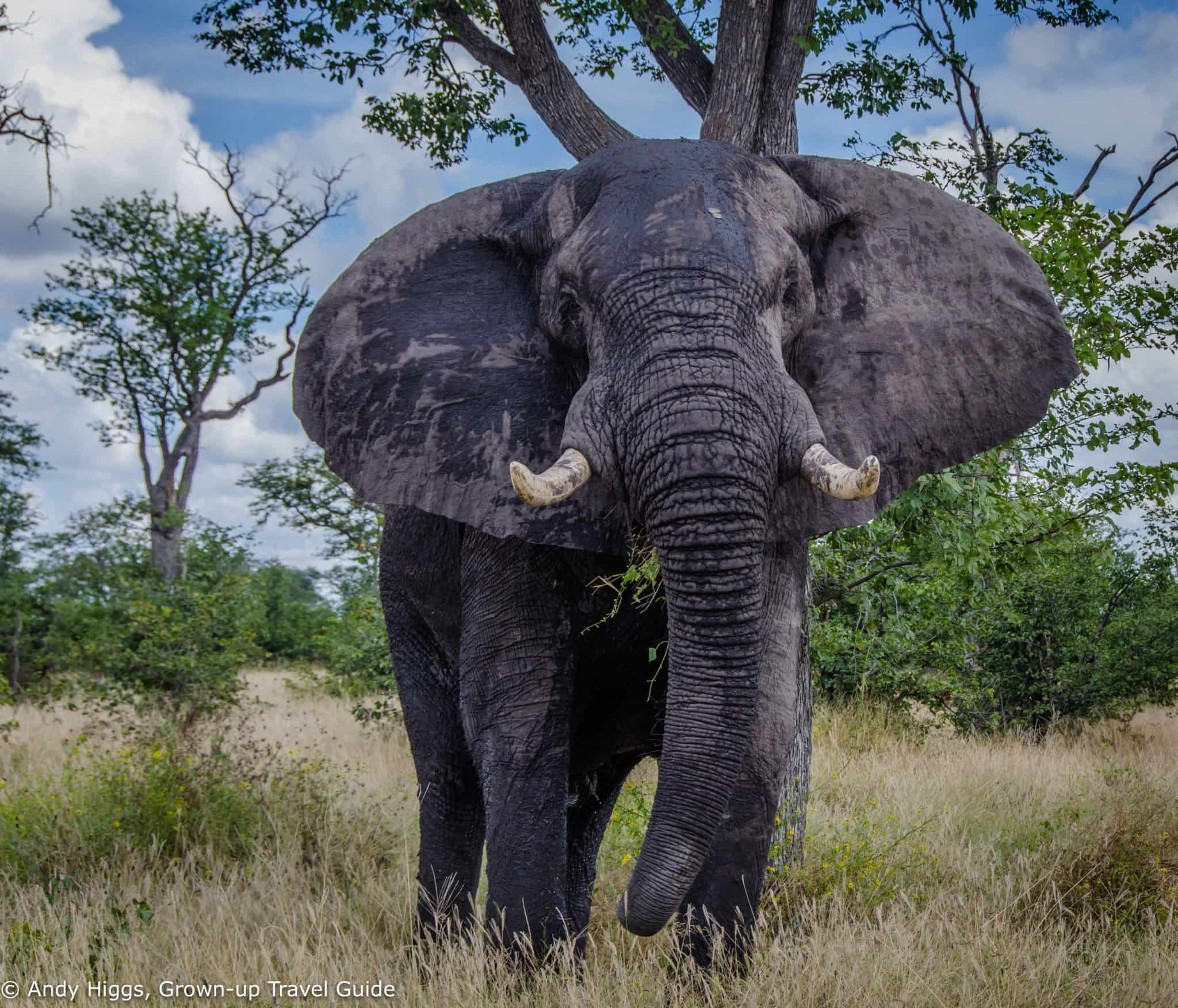 I for one can never get enough of elephants, and we saw plenty. 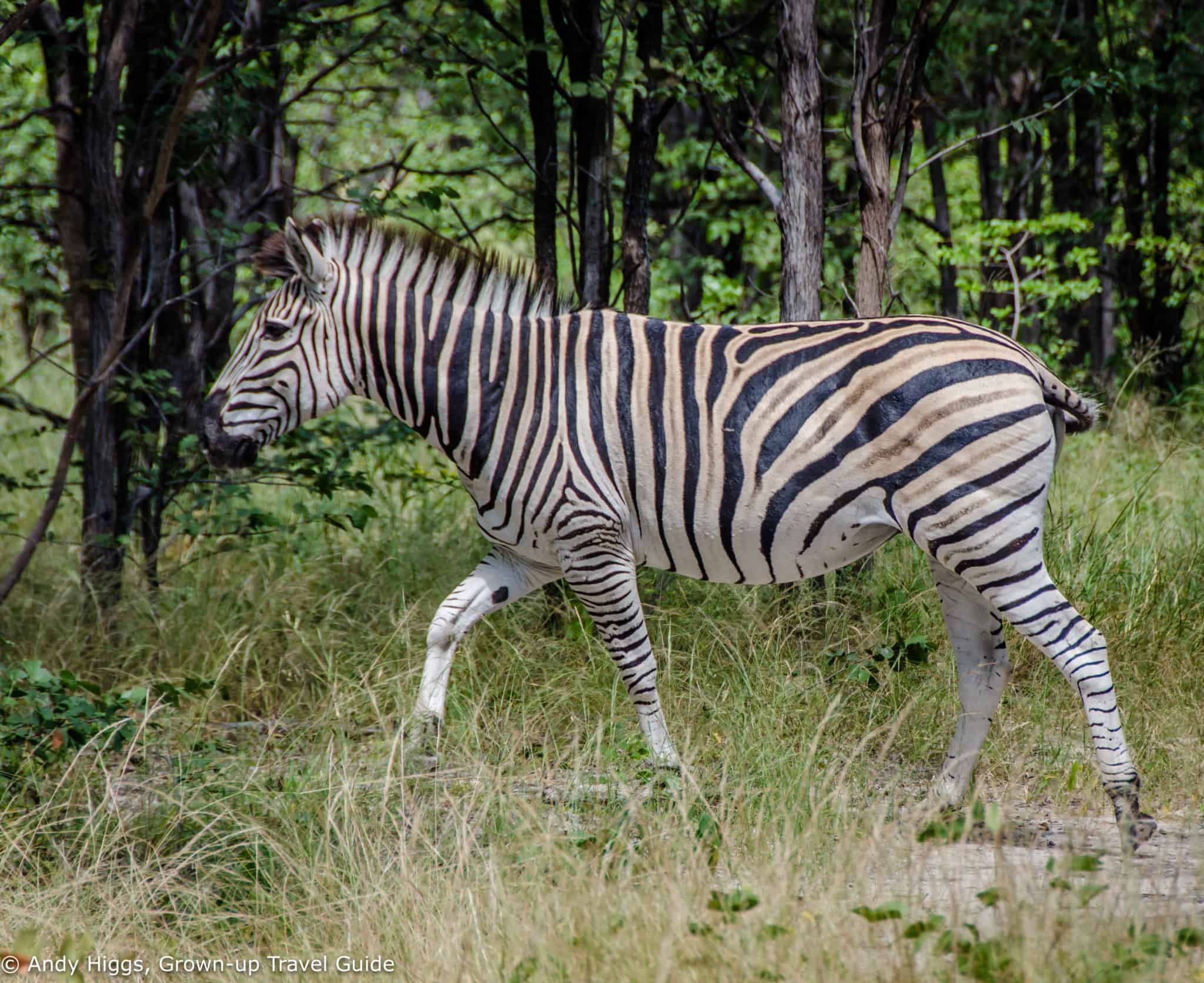 Zebra are everywhere, too. But no less attractive for that… 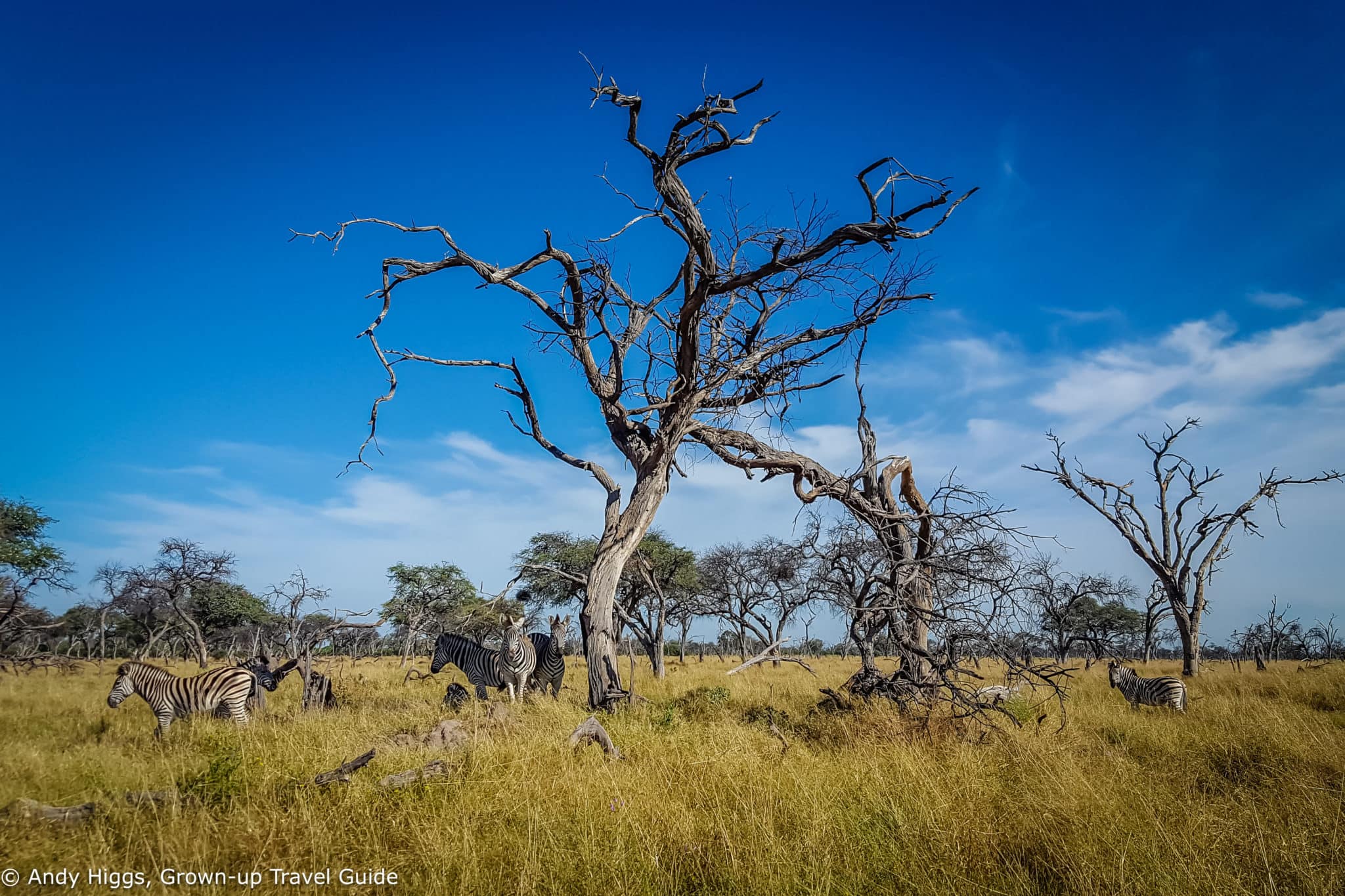 Moremi covers more than 4871 square kilometres of predominantly untouched wilderness, and as you would expect has varied terrain. This takes in savannah, rivers, flood plains and dense forest. 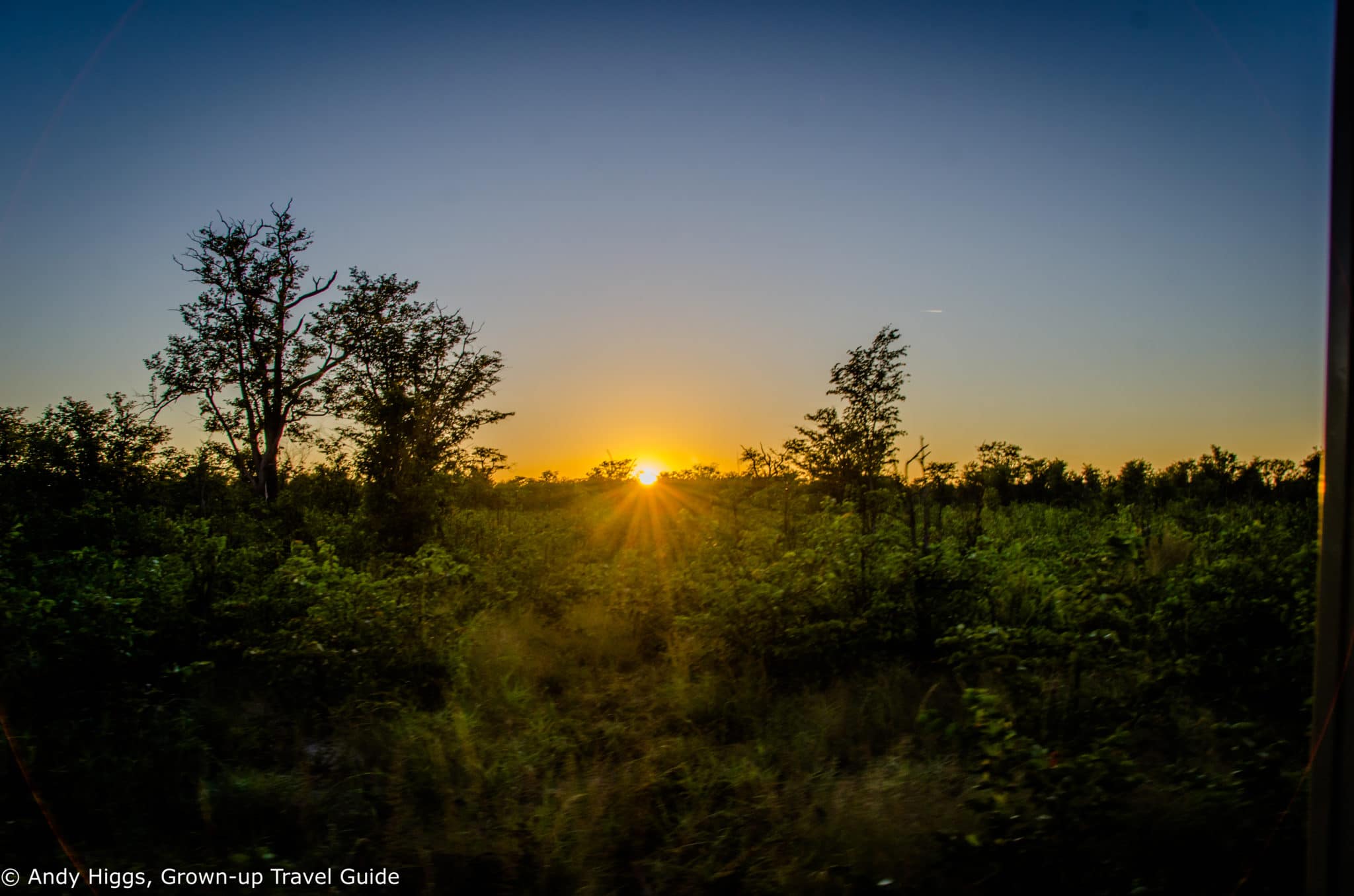 This is where the Okavango Delta meets the land to create both seasonal and permanent wetland areas, grasslands and several types of forests. This terrain makes game driving in Moremi a delight but can also throw up exciting challenges, as you can see from the video below: 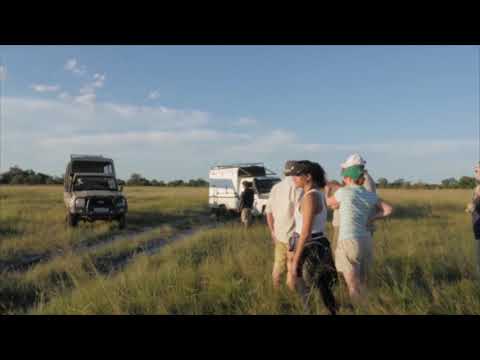 Safari camps within Moremi Game Reserve are located in several areas: a few are situated in the area around Xakanaxa Lagoon which is open to the public, and there a couple found in private reserves with the park, on and around Chief’s Island.

As mentioned before, there are some excellent lodges which lie in the private reserves around Khwai, just outside the northern boundary of Moremi.

Hyena Pan is one of these, and one of my favourite lodges in Africa. Have a look at the video overview below: 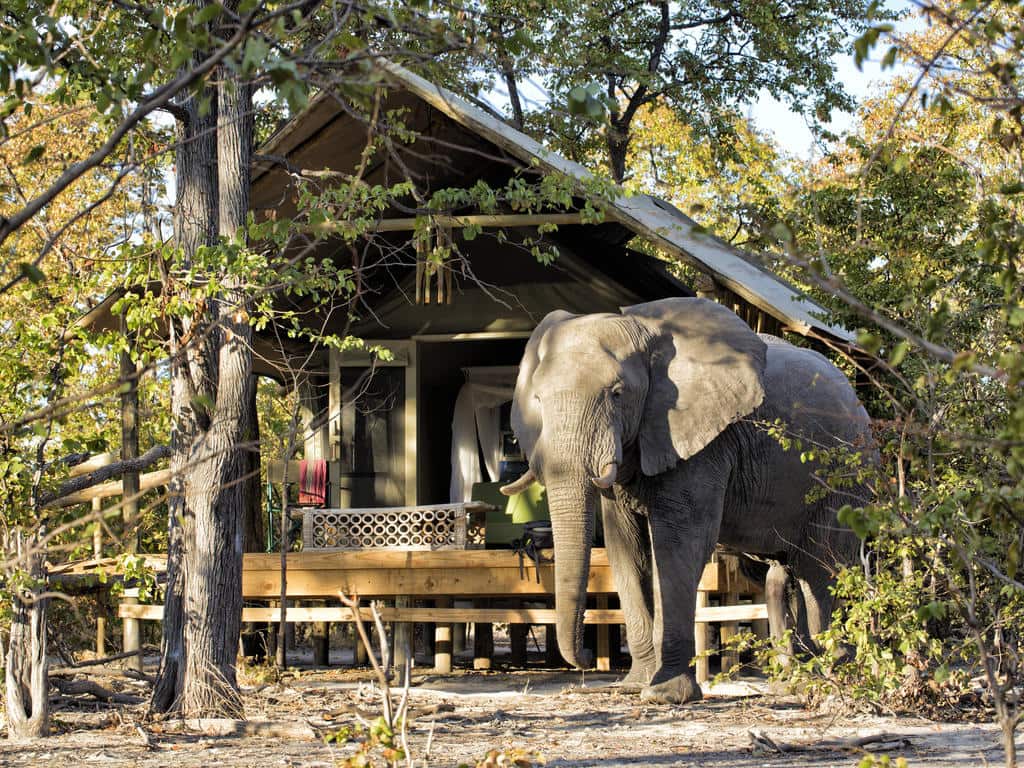 We were able to watch this spectacle with a cold drink from the lounge area: 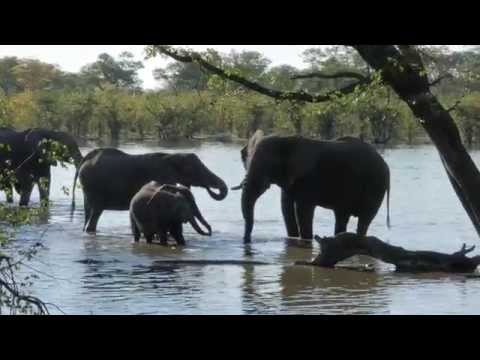 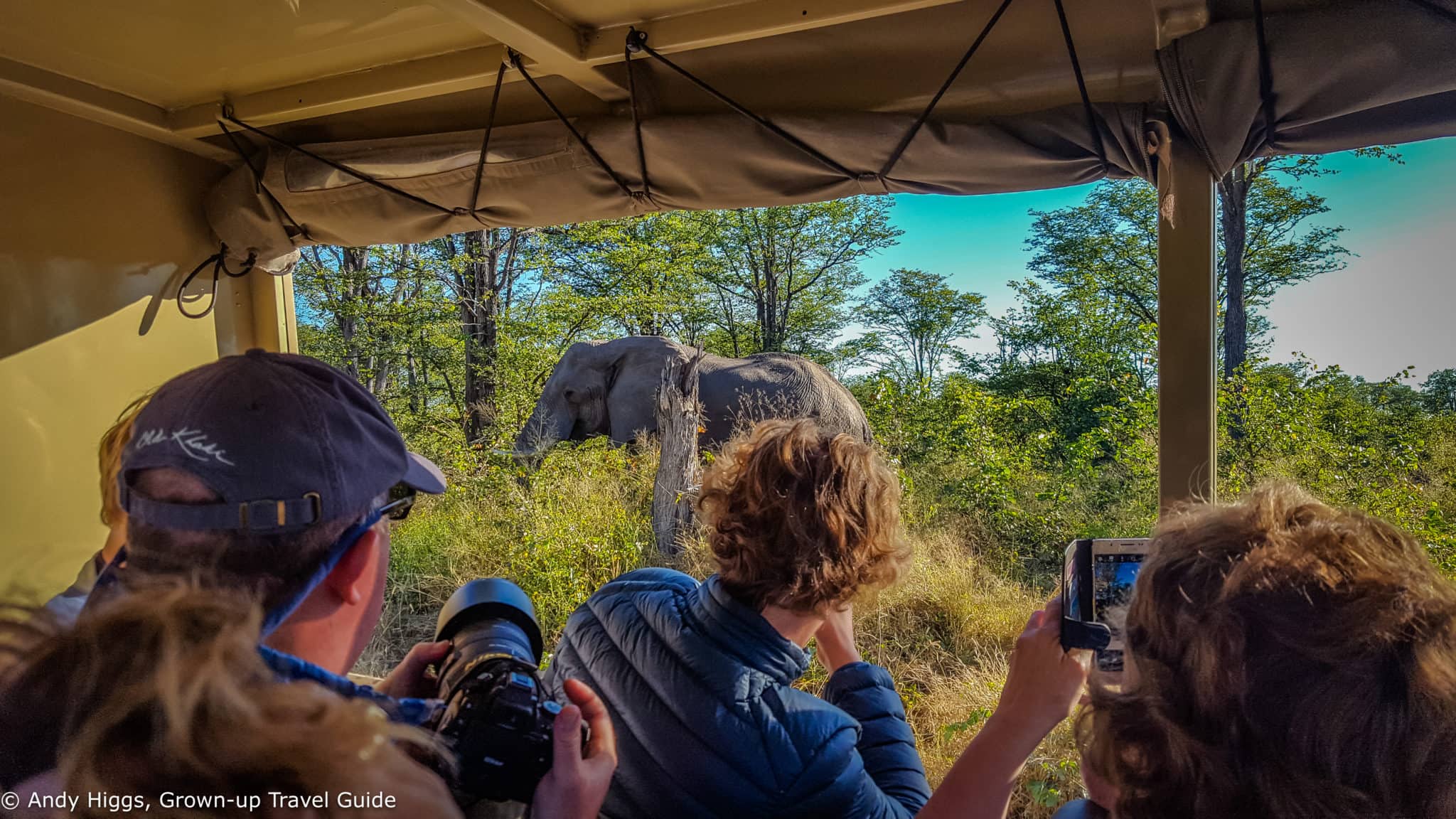 Local drivers are mandatory here, which is best for all visitors as they know the vast area like the back of their hands and are able to get their vehicles into and out of the most unbelievable situations.

Here is a video of some of the sightings we enjoyed in 2015: 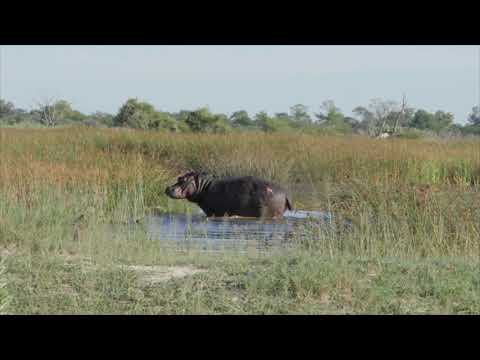 Moremi is a very popular destination for the self-drive camper, and is often combined with the Chobe National Park to the northeast. Many of these stay at the Third Bridge campsite, but the reserve is so vast that you will never find that it feels crowded.

Moremi is one of the best places in Africa for spotting wildlife, with a high density of animals. A particular advantage is that the wildlife in Moremi are generally relaxed, which means that game vehicles can get closer than is the case in many other national parks and reserves. The reserve offers a beautiful, varied and green landscape featuring lakes, rivers, flood plains and forest.

If you are looking for somewhere really special to stay when visiting Victoria Falls in Zimbabwe, you won’t get more spectacular than Gorges Lodge

Day 7 of your virtual safari and you’re spending the day in Victoria Falls, Zimbabwe

South Luangwa National Park deserves its reputation as one of the best safari destinations in Africa; a real wilderness but boasting a high density of wildlife. With recent estimates of over 40,000 elephant, a wealth of other animals and excellent predator sightings - including leopard - it is hard…

South Africa is a perfect self-drive destination - in this four-part series I will show you many of the reasons why... I love it when a lack of a plan comes together You may remember that in April I used frequent flyer points to fly to Johannesburg where I would…