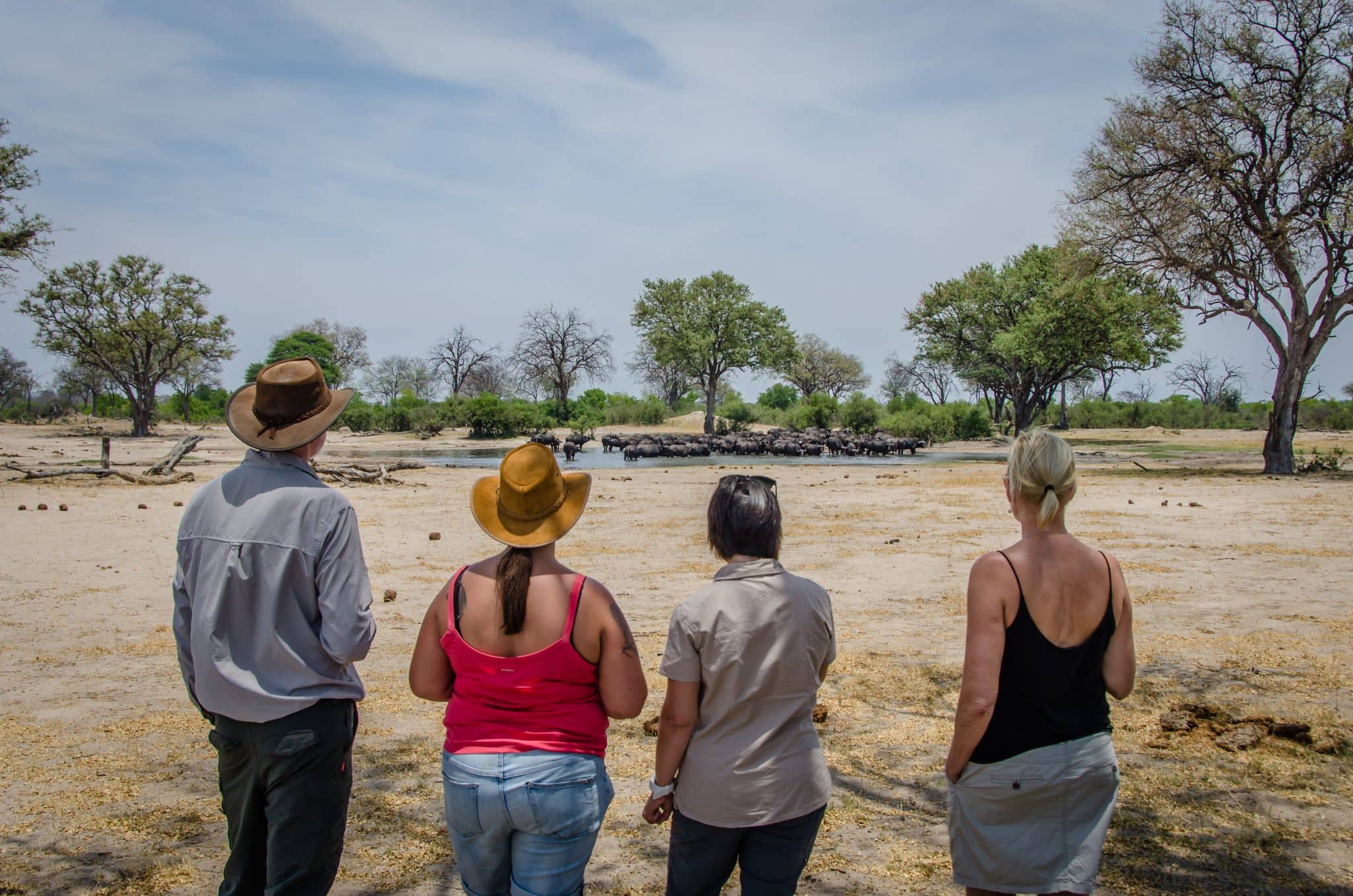 Hwange National Park is a true paradise for a safari trip and one of our absolute favourites in Africa. It is notable for the huge number of elephants but is also home to an abundance of other wildlife. The park is spectacular in terms of landscape, too – with open plains full of photogenic dead trees, sandy scrubland as well as thick forest. It feels like a true wilderness area – and isn’t that what you are looking for?

Often referred to as one of the best national parks in the whole of Africa – with good reason – Hwange National Park is also the first place I ever went on safari. I don’t think this has made me biased, but in any case it remains one of my favourites. 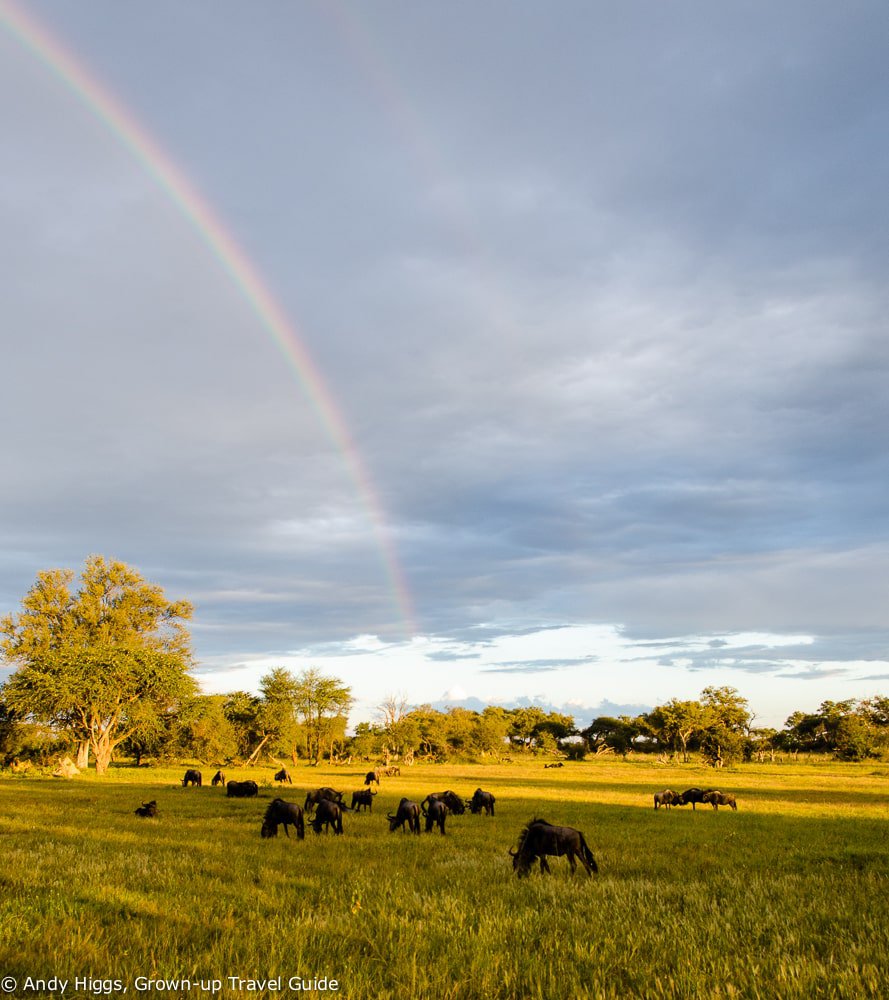 I visited in 2014 and we drove in from Victoria Falls at the tail-end of the rainy season, which made for a few challenges. The usual route, over Gwai bridge (and I use the term ‘bridge’ in the loosest possible sense here) was impassable as the river was too high, so we took a long and convoluted – and bumpy – trail along the far edge of the park before heading inside and then out again. 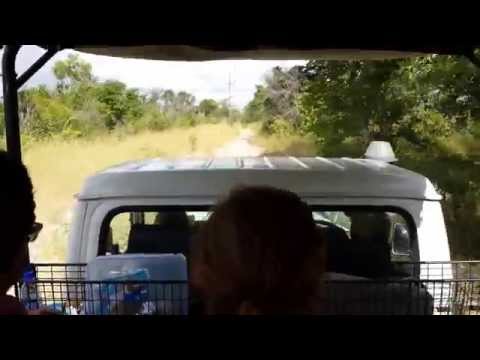 This led us to Bomani Tented Lodge which is situated on a private reserve just outside the national park in the Ngamo Forest Area.

Incidentally, on my way out it was (just) possible to use the regular route, as shown here: 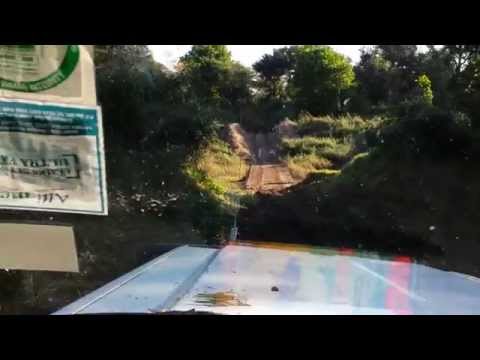 I returned in 2018 to visit Bomani once more as well as Camelthorn Lodge and Nehimba Lodge, all Imvelo Safari Lodges Hwange properties.

This article is based on personal experiences from those two trips.

Hwange National Park is big. It’s the biggest national park in Zimbabwe and – if this helps you to grasp the scale – it’s half the size of Belgium. Or 18 times the size of New York City.

In fact the park is 14,651 sq km and is undoubtedly one of Africa’s greatest.  Hwange National Park was granted Game Reserve status in 1928 and proclaimed a National Park in 1961.

The railway line along the north eastern boundary of Hwange was built just after the turn of the last century and is the same track that crosses the bridge at Victoria Falls.

Hwange’s waterholes are famous and during the dry season months from June to November all the wildlife including herds of elephant flock to them in a daily cycle that runs from morning until well into the night.

In northern Hwange you can also visit some interesting ancient archaeological sites at places such as Bumbuzi and the Mtoa Ruins, important to the history of Chief Hwange and the Nambya people resident north of the Park.

Hwange has always been renowned for its incredible diversity of wildlife, and to this day it boasts more varieties of mammal and bird species than any other Zimbabwean National Park. There are over 100 species of mammals, including 19 large herbivores such as buffalo, eland, sable and wildebeest, and over 400 bird species. 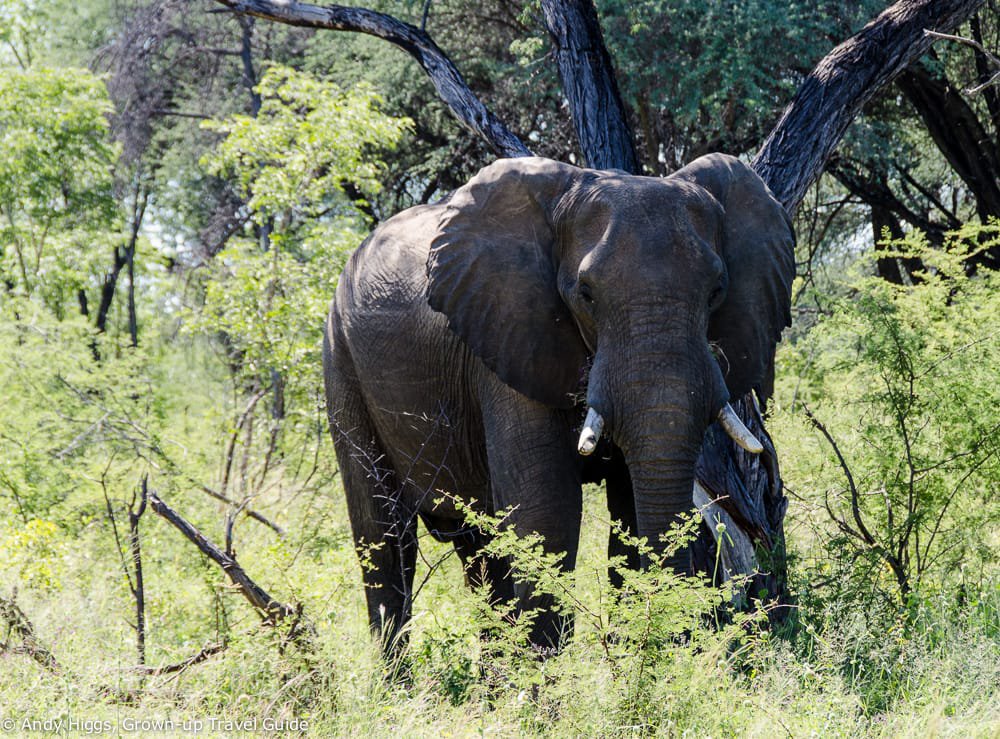 However, the area is particularly famous for its population of elephant, some 44,000 strong – based on the latest aerial survey – and combined with the elephants of northern Botswana this is the world’s largest contiguous elephant population and a flagship for the  Kavango Zambezi Trans Frontier Conservation Area (KAZA TFCA). 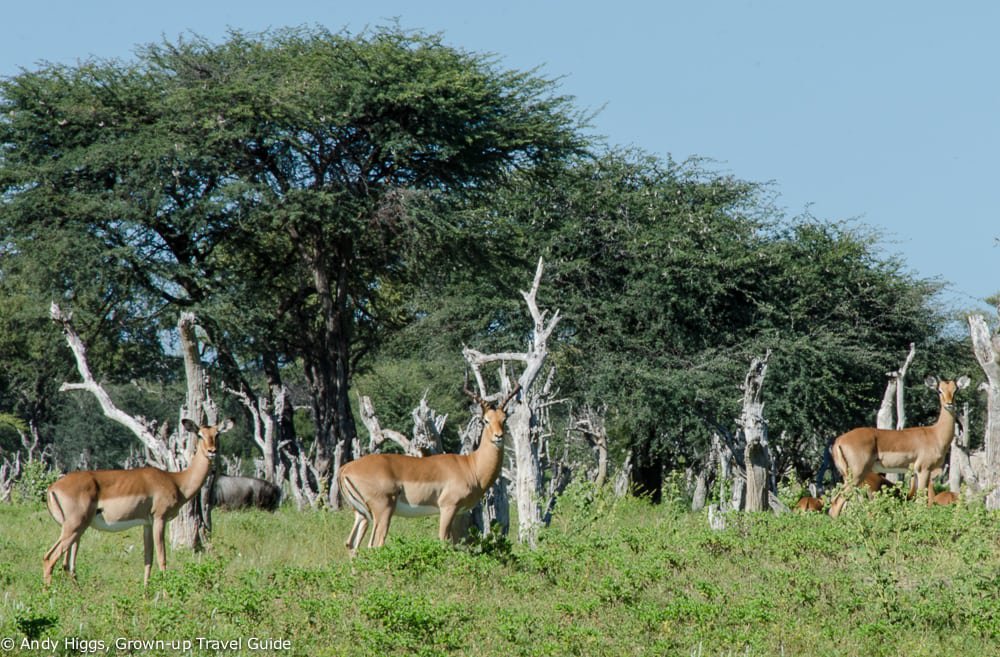 One of the best and most striking aspects of Hwange is the diversity of landscape. On a game drive you may be in a sandy, barren landscape one minute and in a dense forest a surprisingly short time later. But the ecology of the park can be summarized as follows: the southern two thirds of Hwange are characterized by deep Kalahari sands, which support impressive forests of Zambezi teak and other hardwoods. Within these woodlands are ancient fossil lakebeds and drainage lines, which are now large savannah grasslands fringed with acacia and leadwood trees. 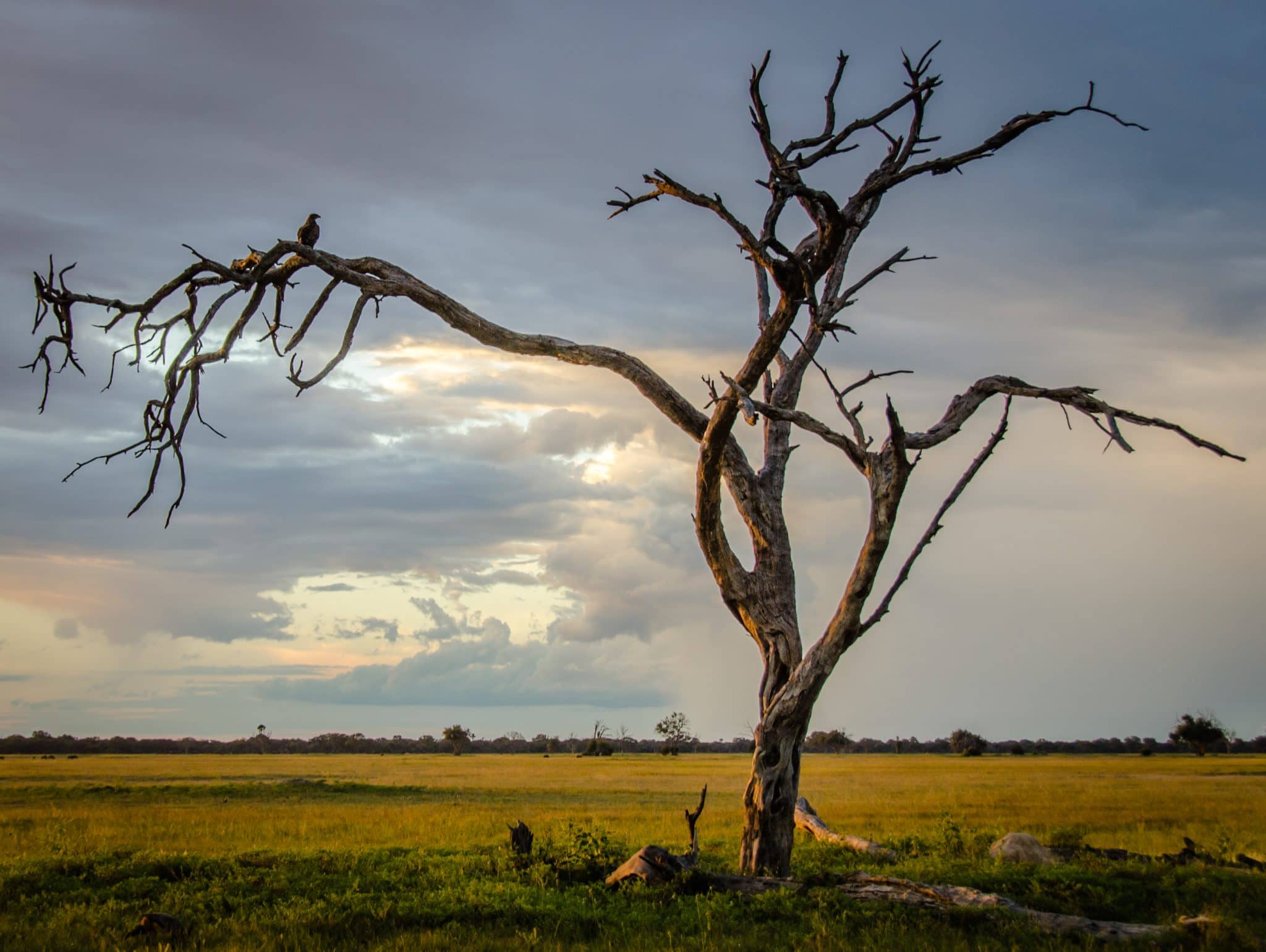 In the eastern section (for example where Bomani Tented Lodge, The Hide and several other well-known camps are located) you will find a mix of open grasslands and woodlands which provides the perfect diversity of habitats for the full range of both grazing and browsing herbivores  resident in Hwange and then of course the carnivores that prey on them – lion, leopard, painted dog and both spotted and the rarer brown hyena. 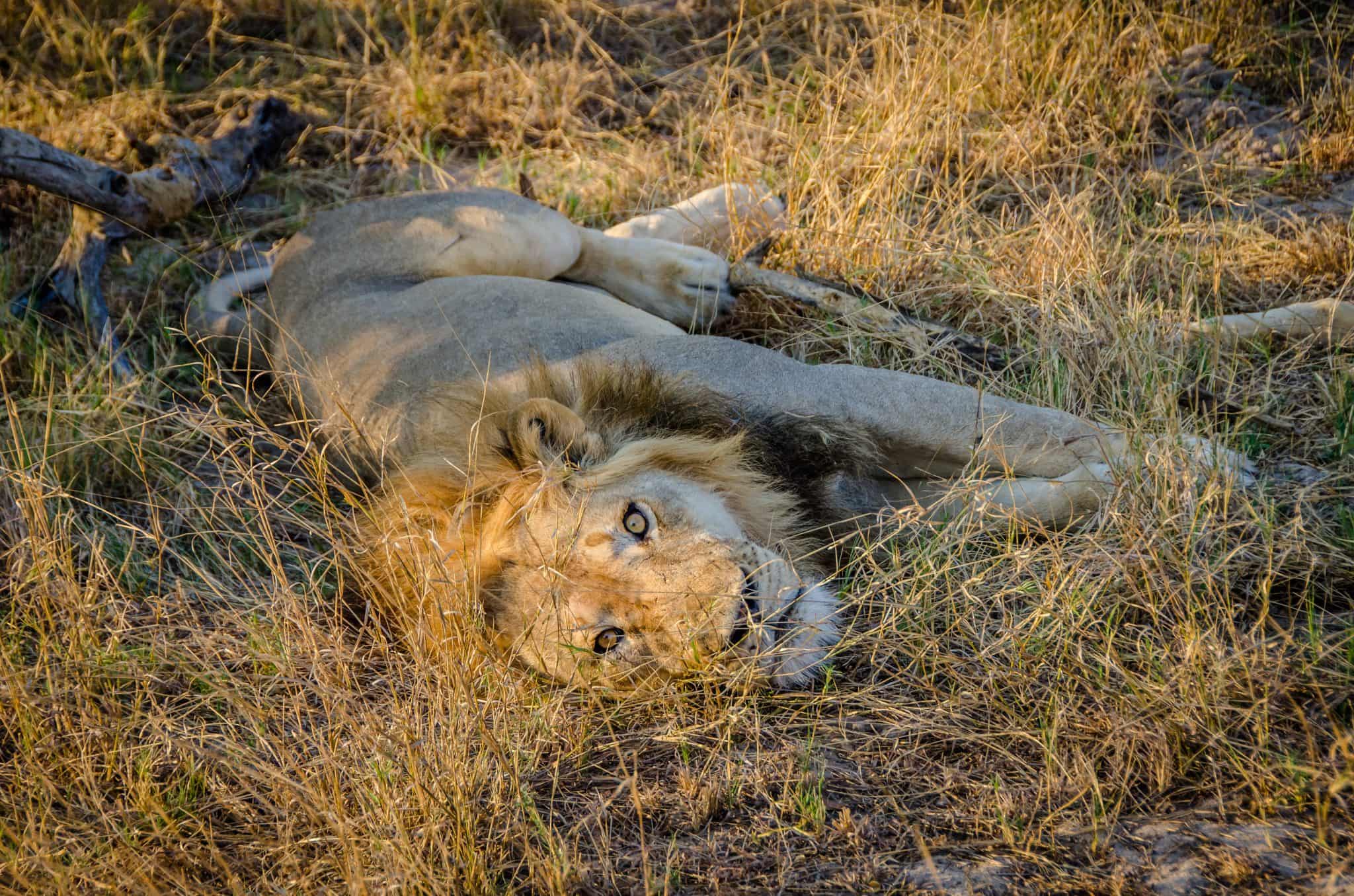 This abundance of wildlife set in both woodlands and open grasslands provides some of the best year-round game viewing to be found anywhere in Zimbabwe. 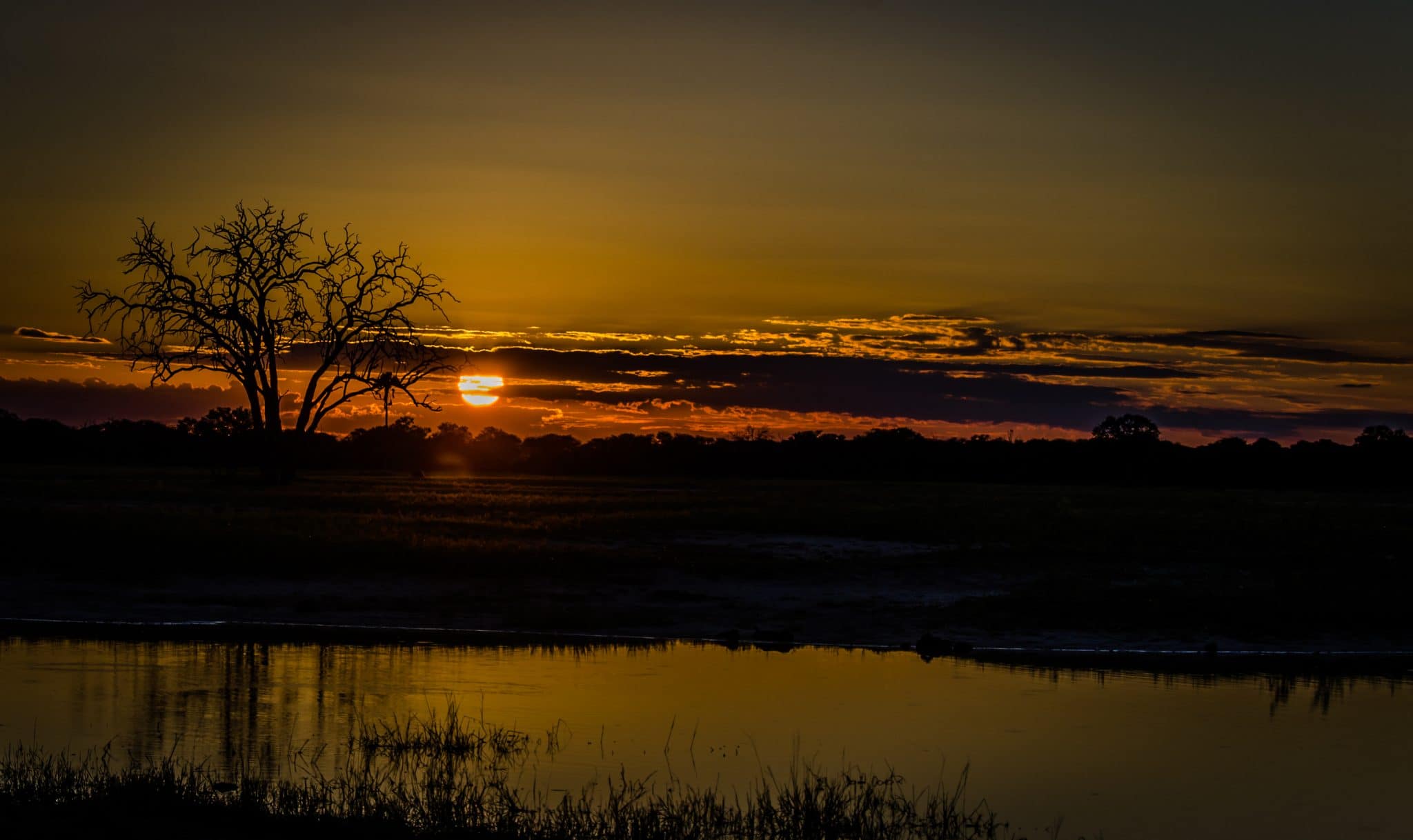 During the wet season months from December through March, the ancient lake systems still fill with water; the open grasslands become flooded and attract migratory birds from all over Eurasia and Africa. Over 300 species have been recorded in the eastern part of the park, both migrants and residents.

Northern Hwange is distinctly different from the south, drained by the Lukosi and Deka Sand Rivers, dominated by mopane woodlands, and even hills and kopjes. Set firmly astride the southern and western Kalahari Sand and northern Mopane woodlands ecotone is Nehimba Lodge. A fascinating feature of the north west are the natural seeps such as Nehimba and Shakwanki where elephant and other animals still dig for water as did the San people that inhabited the park historically. 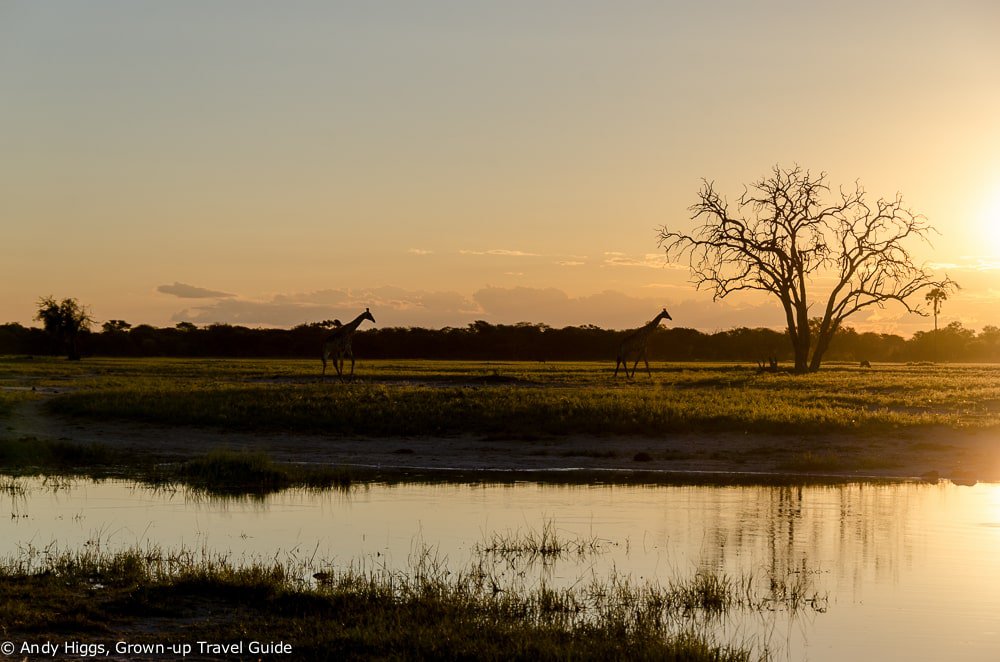 The grasslands of the Shumba area add further diversity and the dams such as Masumo and Mandavu make for wonderful day trips and picnic lunches.

Despite its massive size, there are only about 20 lodges in or within striking distance of Hwange National Park, which means you will not be surrounded by other vehicles when you find a lion, unlike in some of the East African parks. 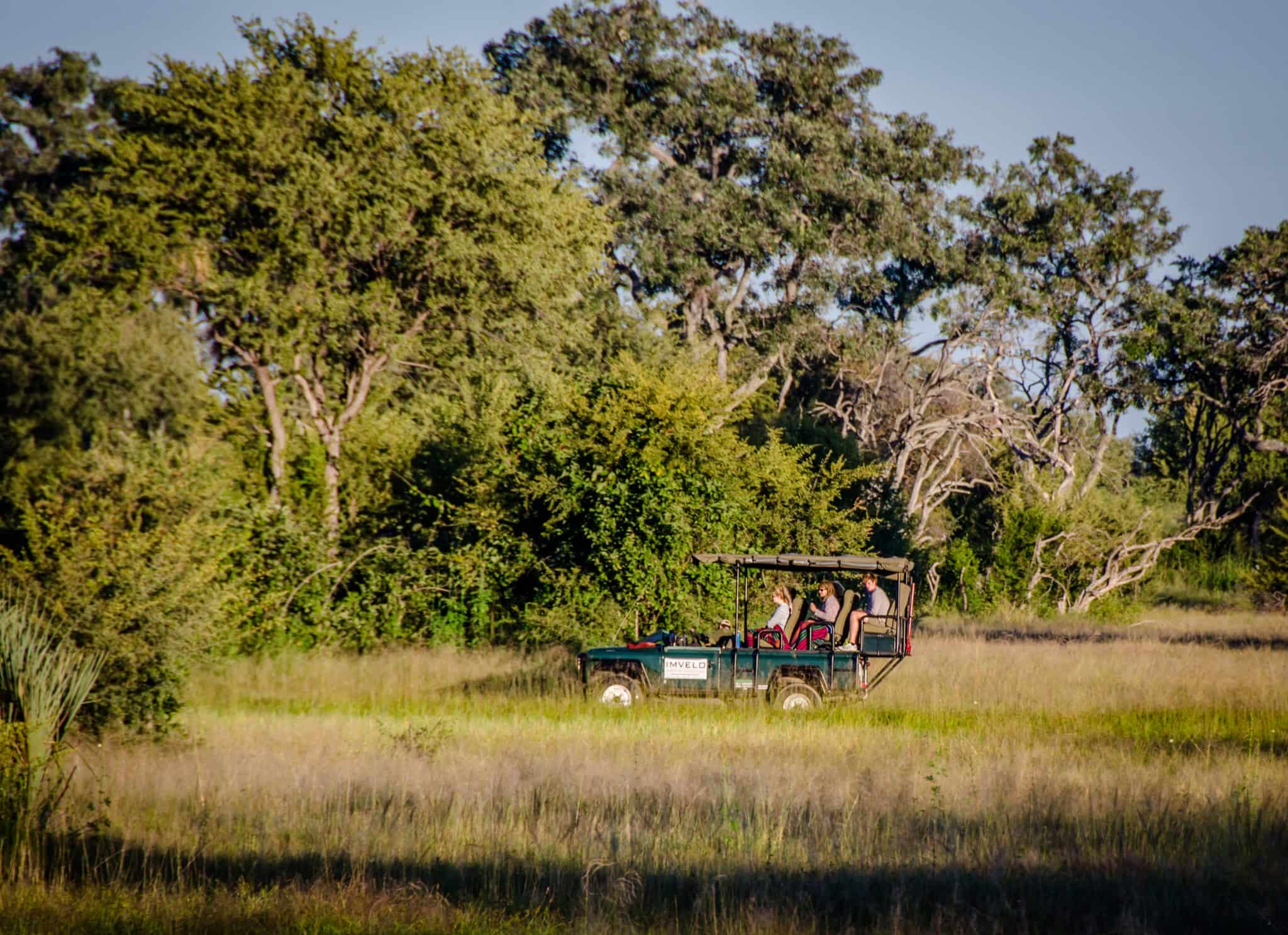 Many of these are situated on private concessions, so the only other 4X4s you will see will be others from the same lodge.

This is a major selling point and makes a safari in Hwange National Park a very special experience. 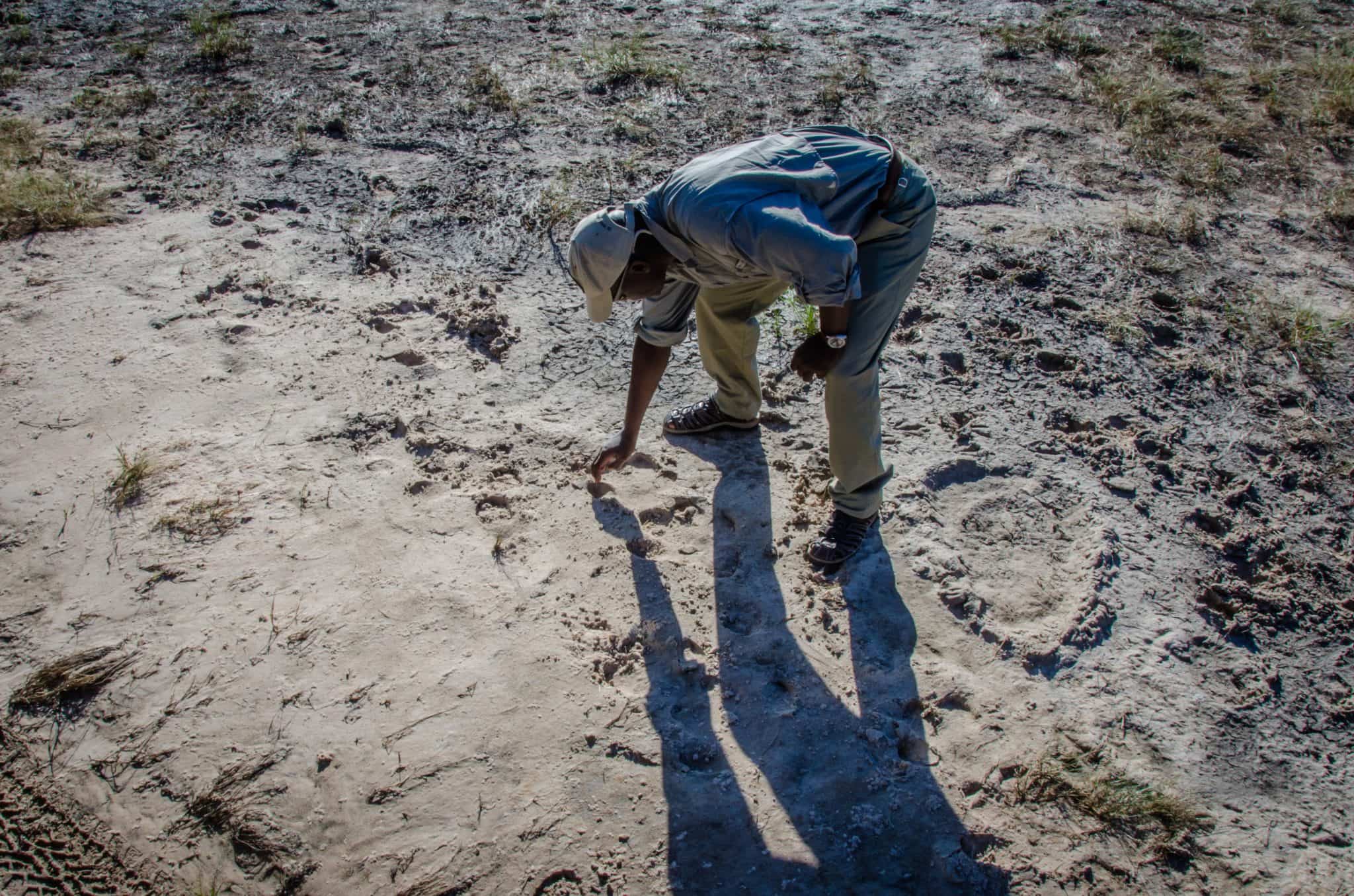 The first thing to make clear here is that guides trained in Zimbabwe are the best in Africa. With a gruelling 7-year path to becoming qualified, this is no quick path to a job like in some places (I’m looking at you, South Africa…)

Since your guide essentially makes or breaks your safari, you can rest assured that you are in good hands in Zimbabwe.

Here’s a compilation of clips from both 2014 and 2018, showing the variety of landscape and some nice wildlife sightings. See if you can see the difference between the wet and dry seasons – and what a change 4 years makes to a certain person in the video… 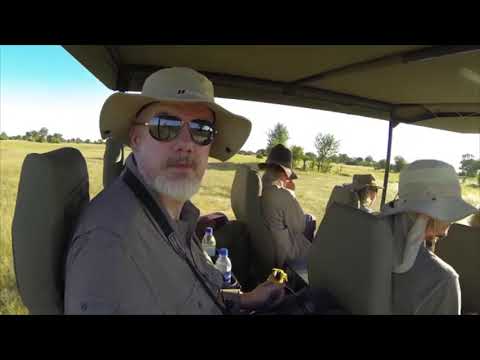 Walking safaris are also a possibility here, which are a great opportunity to get really close to nature and learn about tracks, flora and the smaller animals.

This section is not to encourage potential self-drivers, but more to let you know if you are likely to meet plenty of vehicles driven by tourists. There is nothing wrong with this, but many self-drivers don’t follow the same etiquette as the guides do.

The park is open to self-drivers, but in my experience you seldom see them, so again game drives here are mostly a wonderfully solitary activity.

Hwange National Park is a true paradise for a safari trip and one of our absolute favourites in Africa. It is notable for the huge number of elephants but is also home to an abundance of other wildlife. The park is spectacular in terms of landscape, too – with open plains full of photogenic dead trees, sandy scrubland as well as thick forest. It feels like a true wilderness area – and isn’t that what you are looking for?

Contact us about tours to Zimbabwe and Hwange National Park, and if you are looking for the best, check out our Ultimate Western Ultimate Western Zimbabwe tour itinerary. But never forget we can tailor your trip exactly how you want it…

There seem to be collective nouns for every animal you could hope to encounter, and most of them appear to have been dreamed up around the campfire after three too many G&Ts. No matter, learn a few of these and you’ll be able to impress fellow passengers on your game drive.