This is the second part in the series. You can read the other articles here:

Another day, another country 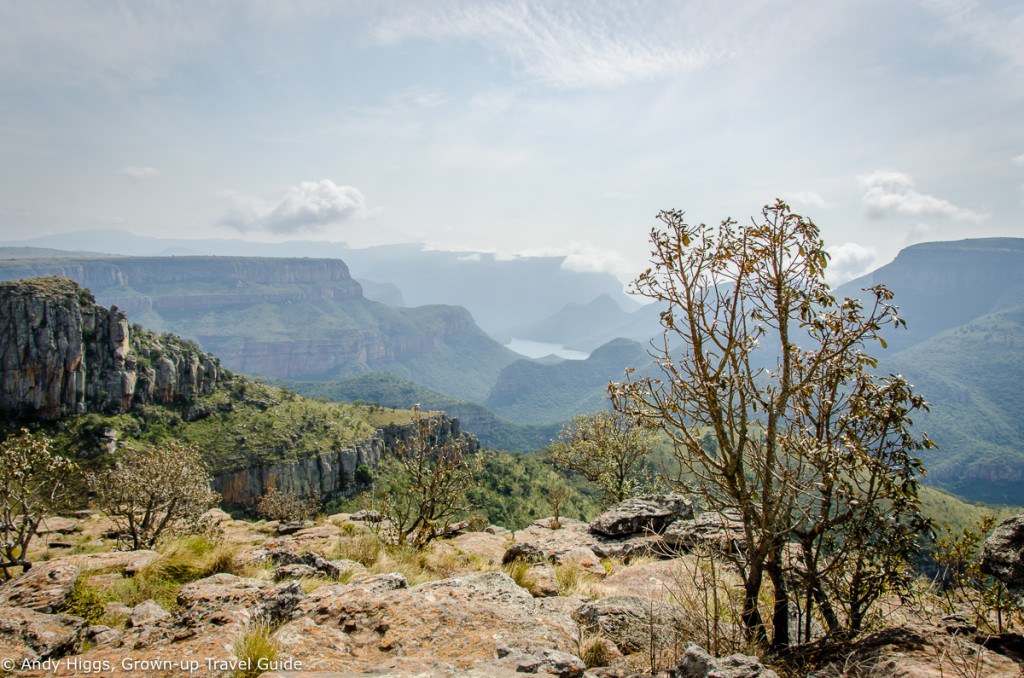 After having rested up at the lovely Graskop Hotel in, er, Graskop and driven along the Escarpment taking in some of the many stunning views along the way – see above – it was time to turn the Kia around and head for eSwatini (formerly Swaziland).

As mentioned in the previous instalment, while at the Graskop I’d decided to include the kingdom in my itinerary on my way to the Drakensburg mountains.

All that remained was rather a lot of road…

The quickest route to the eZulwini Valley where the next hotel is located would have amounted to around 330 km. The heat seemed to have got to my SatNav as it suggested an alarming detour via Mozambique. On second thoughts, it wasn’t even very warm this morning so I have no idea what that was all about. It was, however, a warning sign that I should have remembered – and heeded – later in the day.

But I chose a third option, which was to cross the border at Jeppes Reef to enjoy the mountain road into eSwatini over the wonderfully-named Piggs Peak. This would add a couple of hours to the journey time, but promised to be more scenic.

I made good time back to Graskop and then continued through the lovely countryside to Sabie, another timber town (in fact the centre of the industry). I didn’t stop but a lot of people do – Sabie is a good base from which to take part in activities in the area such as mountain biking, rock climbing, white water rafting and so on.

Continuing further south and passing by countless enormous plantations, my next goal was the large city of Nelspruit where I needed to fill up with both food and petrol.

I did the latter but neglected the former as I wanted to keep moving. In the end I didn’t last long before I had to pull over and buy a sandwich before heading onto the very smooth highway east to Mozambique – and to eSwatini.

A police checkpoint caught me by surprise and I was still filming with the GoPro stuck on the car bonnet as  I pulled up. Policemen are not generally known for enjoying being caught on camera but luckily the guy who gave my car the once-over was not overly concerned.

He asked me what it was for, to which I replied that I was recording my holiday to show my family. That seemed good enough for him – I think he had bigger fish to fry, to be honest.

After he waved me through it wasn’t far until the turning south to eSwatini. The road was a lot narrower and in a shabbier state that the toll road I had been speeding along from Nelspruit, but the journey was indeed scenie – with spectacular mountains looming ahead.

I stopped just short of the border post to remove the GoPro (customs staff are even more camera-shy than regular police, I find) and fish out my passport.

Out of (South) Africa

Formalities took just a few minutes on the South African side, involving a stamp in my passport and not much else. I then drove the couple of minutes through no-man’s land until reaching the eSwatini border post.

Here I needed to pay a small charge for bringing in the car – a road tax, basically – and get my passport stamped. The eSwatini immigration officers were polite, efficient and friendly and I was soon on my way again.

Considering that eSwatini is almost encircled by South Africa it might be natural to assume that the two countries would be very similar – but you notice the difference as soon as you cross the border. eSwatini is a poorer land, but has a very rich culture and is proud of its traditions.

One thing to note when driving is two of the last four ministers of transport have died in road accidents. This speaks volumes about the standards of driving so take extra care and keep your distance from other vehicles. I don’t think I saw anyone keeping to the speed limit outside towns but I didn’t feel unsafe either – just be sensible.

The road climbs steadily to Piggs Peak and the scenery is just amazing – but the weather began to be a slight concern as I stopped to take a few shots. Clouds that genuinely deserved to be described as ‘ominous’ were moving in fast behind me and the skies were rapidly darkening. I wanted to try to reach my hotel before nightfall – or even better, outrun the oncoming storm if possible but both goals seemed a little out of reach. 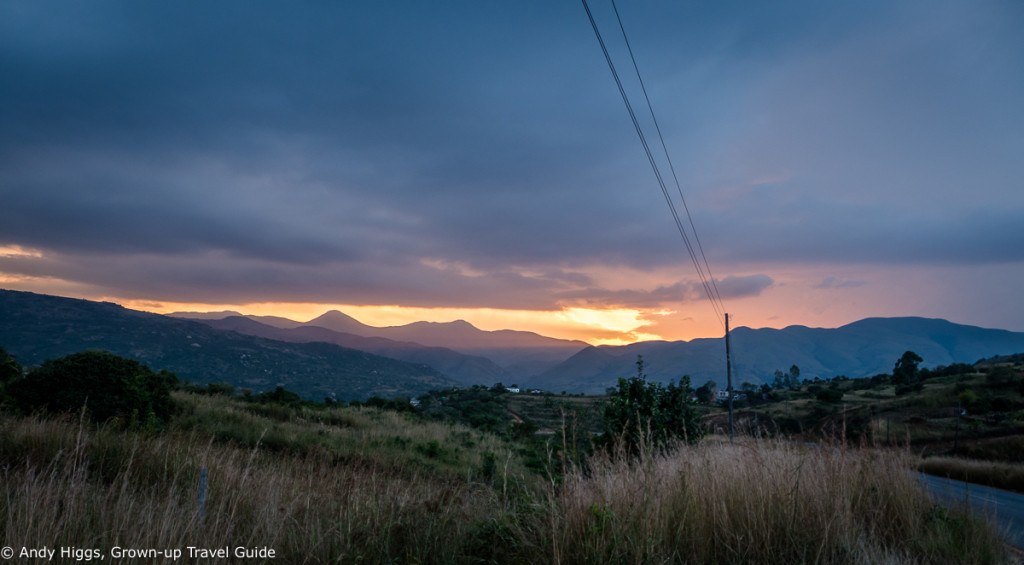 It was only around 1500 but the clouds were so thick that it was almost dark – and thunder began to rumble in the distance. I do love a good storm but I also love a good bed and a cold beer in a hotel bar, so I got the car going again and carried on towards the administrative capital of eSwatini, Mbabane.

A few weeks ago I was playing around with some of the GoPro footage from this part of the trip and decided to edit it, speed it up and set it to rock music. Why not, right? So here you can watch most of the journey from the highway outside Nelspruit to Piggs Peak, about 100km, give or take – at ten times real speed. How can you resist? 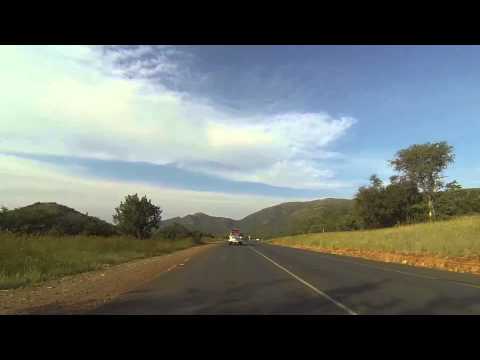 As you can see from this picture, the storm was close, but also created some impressive scenes… 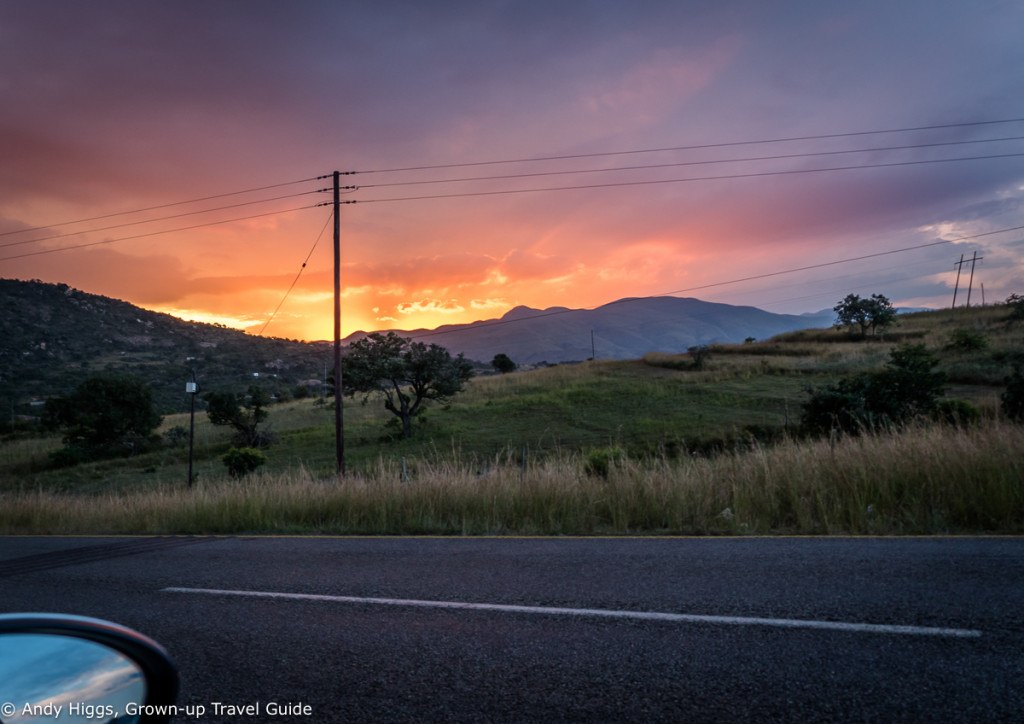 I actually made it to the really rather insane MR3 motorway just outside Mbabane before darkness fell and the rain actually hit. This is a crazily twisty highway with poor lighting and absolutely nutty drivers and a nerve-wracking experience.

It was at this point that I made that mistake I alluded to earlier – I trusted the Garmin to find Mantenga Lodge. All seemed okay at first as it pointed me past the city towards the eZulwini Valley, but as I blasted down a seemingly never-ending hill on the dual carriageway from hell in the darkness it told me to take the next exit.

I did so, finding myself on a sandy path leading into a thick forest. There was a light some distance away through the trees but I do recall thinking it was a strange and unmarked entrance to a large hotel.

I pushed on until the car began to sink in the sand, at which point I performed the mother of all three-point turns in a pitch dark wood. On sand. I made it out and back onto the highway, after which I vowed to trust my own instincts and map-reading skills next time.

In the event the turning – clearly marked – for the eZulwini Valley appeared just a few minutes down the road and I left the motorway to drive past a weird mix of casinos and enormous luxury resorts. With casinos.

These used to cater to South African tourists until that country legalized gambling in the mid-1990s and the bottom fell out of the market. Needing something else with which to attract visitors, focus shifted to cultural and natural attractions such as the Mantenga Cultural Village and Mlilwane Wildlife Sanctuary.

A sign pointed me in the direction of my hotel and I drove the remaining few kilometres with an increasng satisfaction that I had made it and would soon be out of the car for the night.

There aren’t many hotels in the world that can genuinely advertise their location as “nestled between Sheba’s breasts” – but this one can. The main feature of the Mantenga Valley, Sheba’s Breasts are the twin peaks of Lugogo Mountain which was a star in ‘King Solomon’s Mines’. Situated in between is this friendly and comfortable family-run lodge. 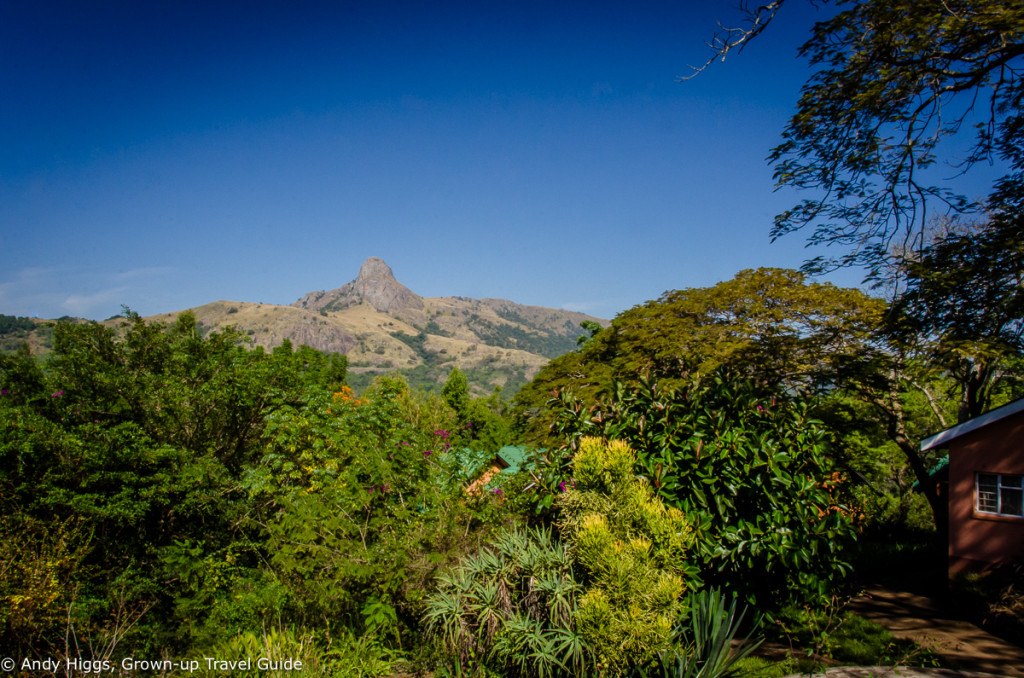 Mantenga Lodge has excellent views of Execution Rock – a dark side of eSwatini history. 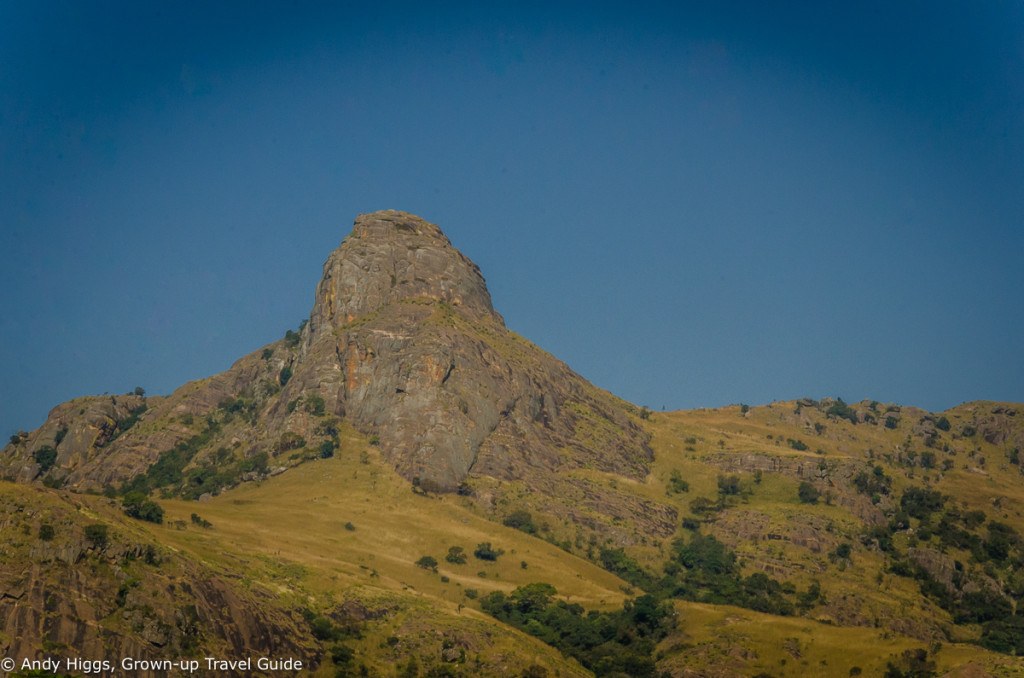 Murderers and thieves were forced to jump to certain death from this sheer drop.

The lodge has 38 ensuite rooms as well as a pool, terrace bar and excellent restaurant.

Again, inexplicably I forgot to take photos of my room so I hope you are able to watch the video: 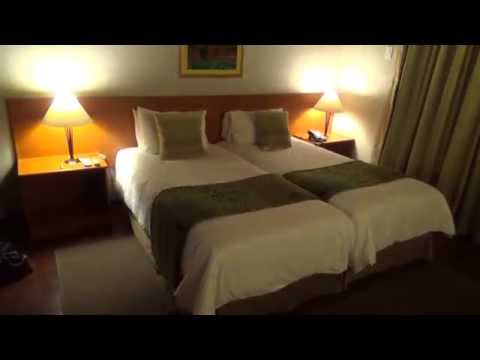 I wanted to stay more than one night here as I really enjoyed the hotel, but alas there were no available rooms for the following evening.

I missed out on trying the pool – which looked very inviting – although I did eat at the restaurant and was impressed by the quality and excellent service.

The lodge is also handy for both the Cultural Village (a few minutes drive to the west) and the Craft Centre (a few minutes walk to the east) so makes an ideal base for exploring this part of eSwatini.

After a welcome and very refreshing sleep, I woke to beautiful weather and went to the restaurant for breakfast, Just as in South Africa, a hotel breakfast is a serious matter that will keep you going for hours – although I didn’t indulge in all the options.

I had an appointment at the Cultural Centre nearby – there was a performance scheduled for the middle of the morning. Packing my bags and filling the car, I checked out after an all-too-brief stay at Mantenga Lodge and headed out the main gate.

Fortunately I had a little time so I stopped at the Mantenga Craft Centre just up the road. This is a collection of shops which sell high quality souvenirs from all over eSwatini. I bought a nice selection of textiles and jewellery – and could have stayed there all day.

Incidentally eSwatini has its own currency, emalangeni, but South African rand are accepted everywhere and seemingly used more often. I wanted to get a souvenir note though so specifically asked for one in my change – having paid in rand.

Situated within the – wait for it – Mantenga Nature Reserve, the Cultural Centre is an excellent living museum with demonstrations of traditional activities and crafts and a twice-daily music and dance show. Don’t leave eSwatini without experiencing this – the dances and music are clearly explained and the performances are amazing. 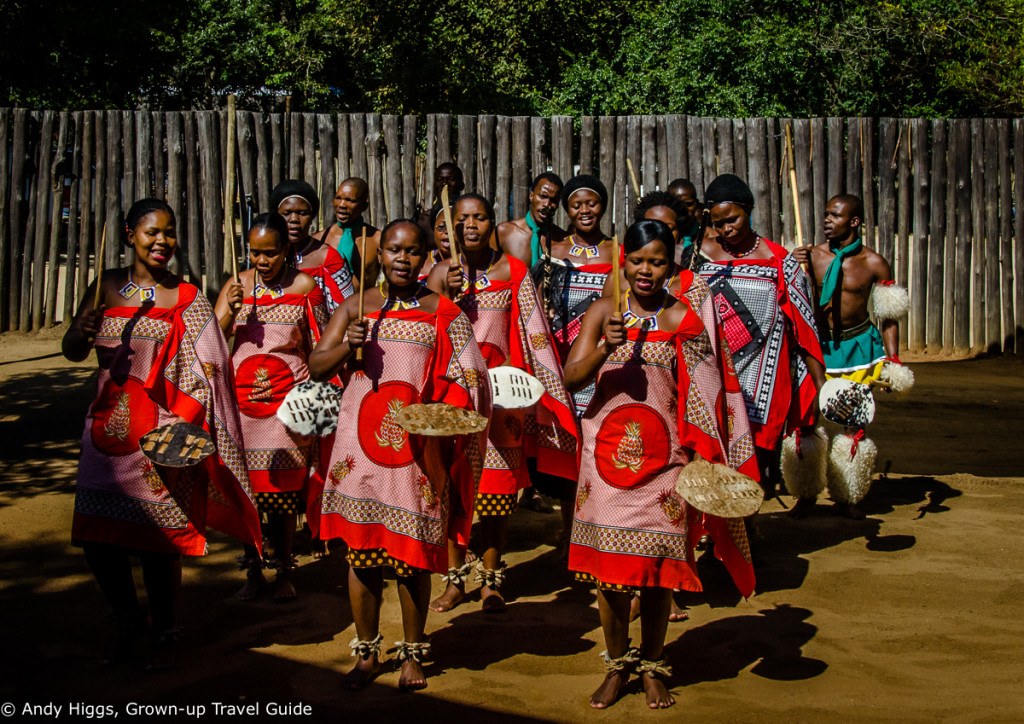 I can guarantee it’ll put you in a good mood – I mean even watching the video works: 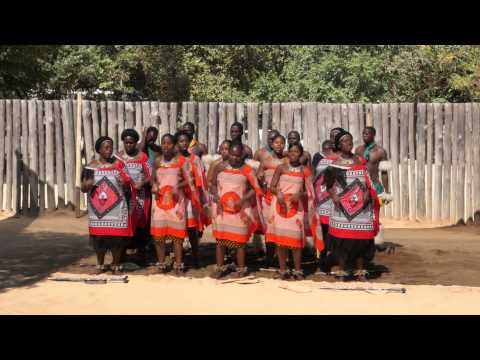 Once again I had a long distance to cover and would be travelling on a few stretches of poor quality road, so after the show was over I had to get moving.

It took me the best part of an hour and a half to reach the Emahlatini border post and was again a stunning drive.

It saddened me greatly to be leaving eSwatini after less than 24 hours in this enticing country. I had enjoyed the friendly people and compelling culture – next time I will stay longer. It would be crazy to visit South Africa without coming to eSwatini, so don’t make that mistake!

It took me 44 years, but I got there in the end. In 2014 I finally got to realise what all the fuss is about. Actually, I guess I knew what the fuss was about but going on safari in Africa far exceeded my expectations and made me understand why this…

This is the second and final part of my trip report from Namibia; you can find the first part by clicking the link below: Part One: Trip report: Namibia - Driving north to Etosha National Park Knowing that I had a seriously long drive ahead of me - in fact…

Going on safari in Africa - it's hard to think of any other travel experience that holds the same allure. Exotic, adventurous, wild...perhaps with a tinge of danger to add to the excitement? Often described as a 'once in a lifetime' activity, a safari holiday is certainly high on many a…