Home Tour Experience the magical Kafue in Zambia with Andy

Experience the magical Kafue in Zambia with Andy

Are you keen to experience an authentic African safari in an unspoilt wilderness? Are you interested in truly getting off the beaten path but safe in the knowledge that all arrangements have been made and with the fun of being part of a small group? Well then we have something special for you. We have put together a trip to the incredible (and incredibly overlooked) Kafue National Park in Zambia for next year (2023) and on this occasion Andy will be travelling with you too. And it will be his first time in this area too, so he won’t be boring you with tales of previous adventures. But he will bring along his eternal love for Africa, plenty of tips and advice as well as a half British, half-Norwegian affableness. And a burning desire to share the delights of the world’s most exciting continent with as many people as possible…

The exact dates are to be confirmed and we are flexible depending on the requests of the group. Earliest departure May 2022.

More on the destination:

Kafue National Park is Zambia’s largest National Park and the 2nd largest in the world. It covers an area of over 22,500 square kilometres in Western Zambia (about the size of Wales). Although it is Zambia’s biggest and oldest park it is still relatively undeveloped and always gives a feeling of true wilderness.

The Kafue Park used to be one of the most famous national parks back in the early days of safaris, up until the 1980’s. Since 2000, after 2 decades of neglect and poaching, it has steadily regained its former reputation, and rightfully so. 10 years later, after a lot of hard work, the introduction of low impact tourism and a close cooperation with the Department of National Parks and Wildlife, Kafue National Park is truly revived and transformed into one of the most beautiful parks, teeming with wildlife.

Kafue National Park is a unique area. The enormous size (one of the biggest National Parks in Africa), the many different habitats and the huge variety of mammals and birds make it an area waiting to be explored. It is Zambia’s biggest and oldest National Park and is easily accessed from both Lusaka and Livingstone.

But the best of all is the untouched wilderness that the park has to offer as mass tourism does not exist; leaving the park pure and unexplored. This is what a real safari should be like, excellent game viewing with a rich diversity of wildlife, stunning landscapes and all of this unspoiled by large numbers of visitors. Although the park has a lot to offer, relatively few people get to experience this Zambian treasure.

The Kafue National Park is named after the Kafue River that runs through the park for over 250 km. It enters the Park in the northeast and forms Lake Itezhi-Tezhi south of the Park, a beautiful dam with big herds of wildlife roaming around on its shores. Other well known rivers in the Kafue are the Lunga and Lufupa River, which both feed into the Kafue River.

The rivers and lake dominate the landscape in the northern and eastern part of the Kafue National Park and the majority of the safari camps are located around them. Here are some of the highlights of the park.

The famous Busanga Plains are in the Northern part of the park. The area consists of an extensive floodplain that falls dry after the rainy season, attracting huge numbers of game and stunning birdlife. ‘One Fig’, a huge fig tree in the middle of the plains, is a famous landmark. The well-known documentary, ‘Swamp Lions‘, often broadcasted on National Geographic, was filmed exclusively on the Busanga Plains. It is no surprise that Getaway magazine mentioned Busanga as one of the ‘top 10 secret gems of Africa’. The plains are seasonal due to the flooding in the wet season. Small safari camps like our own Busanga Plains Camp operate in this area during the dry season.

The Nanzhila Plains in the South of the Park are relatively seldom visited, but deserve exploring. The grass plains; with large quantities of game and spectacular bird viewing is well worth a visit. You won’t be disappointed…. The writer of ‘Out of Africa’, Karen Blixen’s famous last words were ‘if there was one thing I could do again, it would be to go on Safari’…… You can do such just in the Kafue National Park. A Park that lays amongst the best wilderness destinations in the world, with remoteness, incredible rivers, open plains, woodlands, silence, birds and wildlife. And best of all, within reach!

The Kafue River itself has spectacular riverine forests on its banks and flows throughout the year, changing from a wide, slow flowing river to stretches broken up by islands with fast flowing water. The river attracts a wide variety of animals and birds and is filled with hippos and crocodiles of all sizes. Boat cruises and fishing trips are a must for guests visiting the river. Most safari lodges and camps within the Kafue National Park are based on the Kafue River.

The Kafue flows into the Itezhi-Tezhi dam, Zambia’s second biggest dam after Kariba. The lake has a surface of 370 square kilometres which offers opportunities for boating and fishing trips. The shores vary from grassy plains to rocky bays. The plains around the lake attract a large diversity of animals and birds.

The breeding herds of elephant have settled down and the large predators are back in numbers, among them several prides of lion, cheetah and leopard. Also packs of the endangered wild dog regularly pay a visit. Other animals that you are likely to encounter are buffalo, zebra, hippo and various antelope species like impala, puku, sable, hartebeest, bushbuck, roan and waterbuck.

Zambia has so much to offer. Acknowledged as one of the safest countries in Africa to visit as a tourist, here you will experience some of the finest safaris.

Fig Tree Bush Camp is situated next to a beautiful beach created by the dried sand banks of the Shishamba River. The camp overlooks a large lagoon, 1.7 km long and about 60m wide.

This lagoon maintains it’s alluring water throughout the season attracting an array of wildlife including Elephant, Puku, Impala, Warthog, Zebra, and Hartebeest. Predators like Lion, Cheetah, Leopard and Hyena are regular visitors. The Wild Dog in the area have also been frequent visitors to the area and prey on the concentration of game.

The camp is made up of a Boma and 4 raised Luxury Safari Tents. Each safari tent has an en-suite bathroom and veranda presenting a unique view from the tree canopy. Guests will then come together underneath the Fig Tree, from which the camp is named, to savour the serenity of the lagoon as well as delicious food and wine.

Game drives take place twice a day. Walking safaris are also an option in the cool of the morning and allow guests to explore the surroundings and what they overlook on the drives.

After dinner guests will sit around a campfire, feet in the sand, gazing at the stars and listening to the sounds of the African Bush.

The Plains Camp is the seasonal luxury bush camp of Mukambi Safaris located deep in the heart of the famous Busanga Plains in the north of beautiful Kafue National Park.

A wide variety of species is found on the plains including Lion, Buffalo, Hippopotamus, Lechwe, Side-striped Jackal, and Blue Wildebeest. In addition, large numbers of elephants and 500 bird species are recorded; watch for roan antelope and the rare oribi antelope.

The raised boma (communal area), with open campfire and dining area, is rustic, informal and overlooks the openness of the plains, only interrupted by tree studded islands where Fig trees and wild Date Palms draw their nutrients from the remains of giant anthills. Relax and enjoy a refreshing dip in our pool or sunbathe on the wooden deck whilst overlooking the surrounding wetlands. A wooden viewing platform on stilts tucked away high up in the characteristic Fig tree above the Boma offers a breath-taking view directly onto the floodplain.

Busanga, a landscape so distinctive, it is like no other you will see in Africa. This is the Africa you have dreamt of and you can visit this unique area with Mukambi Safaris. It offers a real "home away from home" experience, where service is professional and friendly, yet unobtrusive. 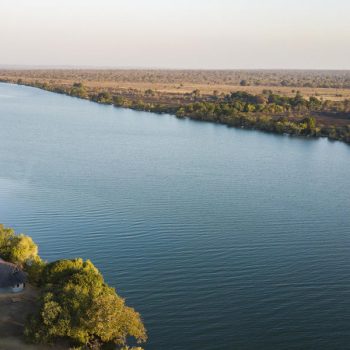 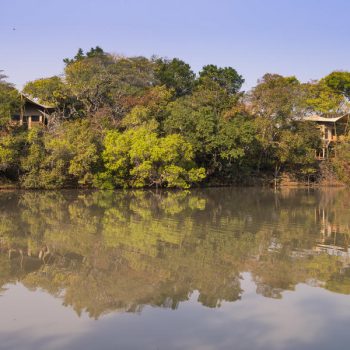 Campfire and pre-dinner drinks on return 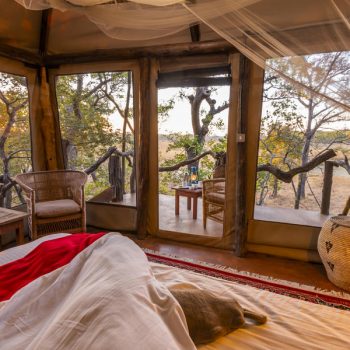 Lunch after activity. Relaxation after lunch up until evening activity (Hammock and swimming pool are available in camp). 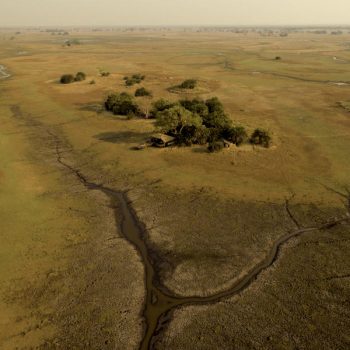 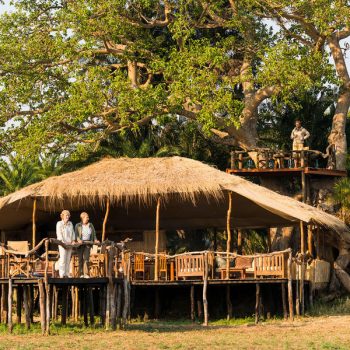 Relaxation time after brunch up until evening activity (viewing deck and swimming pool are available in camp). 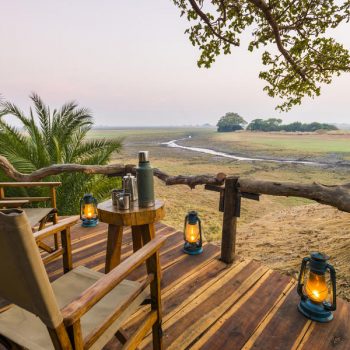 Relaxation time after brunch up until evening activity. 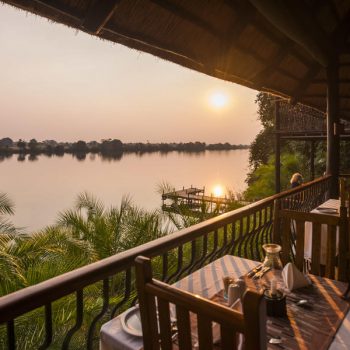 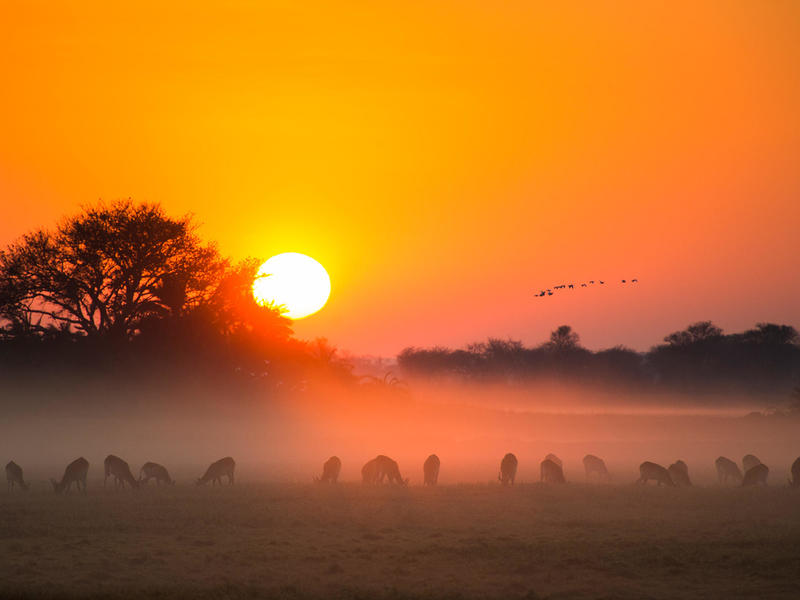 Transfer to Lusaka after morning activity and breakfast at Mukambi.

On this trip you’ll combine a safari with the greatest rides in Africa, on gravel or on tar. Namibia is a fantastic destination for self-drive and…

Particularly suitable for those who have previously visited the Victoria Falls and want to further explore Zimbabwe, this itinerary highlights the superb community and conservation work…

A spectacular 11 day itinerary showcasing some of the absolute highlights of 3 countries in Southern Africa in one expertly-designed and guaranteed unforgettable trip.

There’s SO much more to South Africa than Cape Town and the Winelands – we love those places too, but we are on a mission to…

On this trip you can meet the lemurs including the biggest lemur of all, take part in Malagasy culture & way of life, visit a tropical…

A superb introduction to this absolutely stunning country. I took this route myself in May 2019 and was blown away by the scenery, friendly people and…

Experience the warm heart of Africa and you will soon be wondering why you waited so long to visit. This itinerary will introduce you to the…

On this exciting itinerary you will meet the lemurs, visit the tropical wet forest, experience real Malagasy culture and wonder at the granite and sandstone landscapes…

This incredible itinerary is a superb introduction to Mozambique, combining as it does wildlife and nature, city life and lazy days on white sand beaches.. Your…

Tanzania’s Southern National Parks are some of the largest and most remote in all of Africa. and yet rarely appear in the standard itineraries sold by…

See the full digital itinerary with videos and a ton of photos here
This tour offers an abundance of scenic, wildlife and cultural attractions. Walk the…

South Africa is a fantastic place to rent a car and head off exploring. On this itinerary you will experience some of the less-visited areas of…

This itinerary essentially follows the same route as our Classic tour, but with a higher standard of accommodation. You’ll start and finish in Windhoek, the country’s…

From the culture of the Zulu nation to the Portuguese and Arab influences in food and architecture of Mozambique. Beaches, excellent diving to big game viewing…

What a combination in this itinerary! In my opinion, a mobile safari is the best way to truly experience the African bush and its wildlife, and…