Matjiesfontein was founded in 1884 by the legendary and energetic Scottish railwayman James Douglas Logan.  It became established as a fashionable Victorian health spa, and is now well known for its splendid historical buildings and a peace and timelessness that is rare. In testament, the entire Village was preserved as a National Heritage Site in 1975 under the direction of revered hotelier David Rawdon.Matjiesfontein is a feast for the imagination as between these walls lie a colourful history that includes international cricketers, Olive Schreiner’s residency, fortification during the Boer war as headquarters of the Cape Command, refuge for Jamieson Raid reformers, and controversial war crimes hearings.Step back in time and be indulged in the sumptuous surrounds of yesteryear – take a trip on the Old London Bus, let Johnny on trumpet summon you to dinner, soak up the history in the Transport or Victoriana museums, take in the uniqueness of the Little Karoo with veld walks, hikes and mountain bikes, visit the Boer War British Army remount encampment site (c.1900) nearby, play a game of tennis or simply relax, and read in the opulent lounges or by the residents only pool.Matjiesfontein is indeed a Great Country Getaway where pure relaxation is enjoyed. In addition, we provide an unrivalled setting and excellent facilities to cater for your wedding, family celebration, or conference.

The Lord Milner Hotel is a graded Three-star heritage site hotel and offers 15 classically furnished Luxury, Standard and Single Rooms in the Main hotel buildingTake a step back in time, to hear history’s palpable heartbeat—while the rooms have been tastefully updated in terms of linen and bathroom facilities—the experience will take you back to the Karoo of old.The hotel was named for Lord Alfred Milner, who was the governor of the Cape during The South African War (Anglo-Boer War). The gracious grand dame was completed in 1899, and shortly thereafter served as the Headquarters of the Cape Western Command.At The Lord Milner Hotel, historic ambience, old world service and classic comfort combine.

The Reston Villa has a distinctly Mediterranean atmosphere with its large shuttered doors opening onto a private terrace, shaded by palm trees and bougainvillea. Four large suites provide superior accommodation, set within their own garden away from, but close to, the main hotel. The ground floor bedrooms have shuttered French doors opening onto their own verandas.Reston Villa was once occupied by James Logan's son (also James), his wife and two stepchildren.

The Olive Schreiner Cottage, named after the famed South African author who wrote The Story of an African Farm, is a luxury two-person cottage on Logan Street, the historic main street of Matjiesfontein.The cottage is situated next to the Post Office and offers a bedroom with en-suite bathroom including both a bath and shower, and the classically furnished Schreiner loungeOlive Schreiner—one of the first voices of literature and feminism in South Africa—lived here for a number of years. Today, her cottage is a landmark in the village. It has also been reported that venerated author, Rudyard Kipling, on his first journey to the Cape, made a special journey specifically to visit her here.

The Old Museum Suite is a classic historic cottage on Logan Street, close to the hotel and next to the Laird’s Arms, this suite offers three bedrooms sleeping up to six people, with two bathrooms, each with bath and shower.

The swimming pool—dug out of a stone basin—is set amid a lush garden; a fertile desert oasis that attracts diverse birdlife.The Swimming Pool Suite offers two luxury bedrooms, opening onto a private courtyard patio with access to a swimming pool and a wooden terrace overlooking the Monument River.The suite is located in the hotel gardens on the riverbank terrace next to the Traveller's Chapel, and caters for up to four people, minimum two persons sharing.

The historic Douglas Cottages are located at the back of the main hotel building. These rooms have their own veranda overlooking the hotel’s back garden. The verandas are shared by two rooms each and are perfect for friends and family travelling together, and share a passage between the rooms' entrance doors.Both double and twin bedrooms are available and all rooms have en-suite bathrooms with a shower over bath, hand-shower and bath or shower only. Tea and coffee making facilities are provided in each room.

The Riverbank Rooms all have en-suite bathrooms and balconies that overlook the Monument River, which is dry in the summer months. These rooms each have a nearby parking bay.

The Garden Mews Rooms each have an en-suite bathroom with shower, while one room has a bath and shower. Each room has a nearby parking bay. 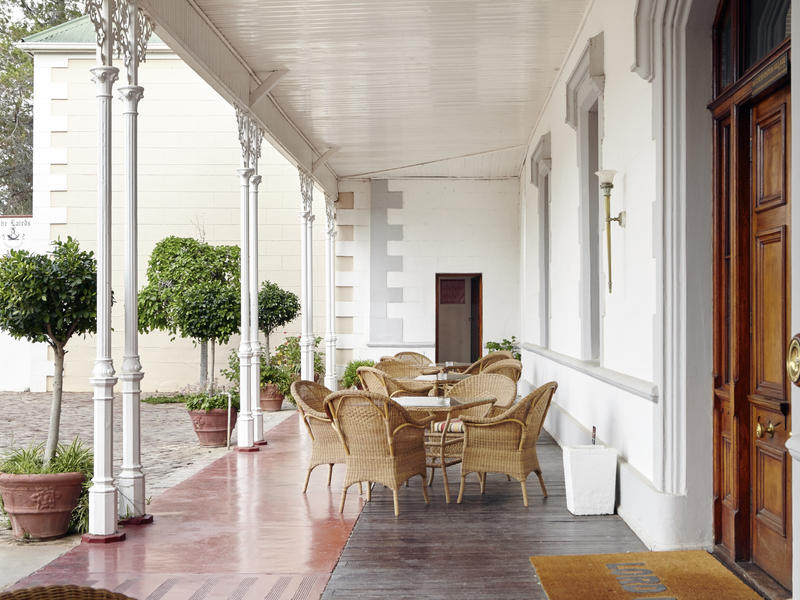 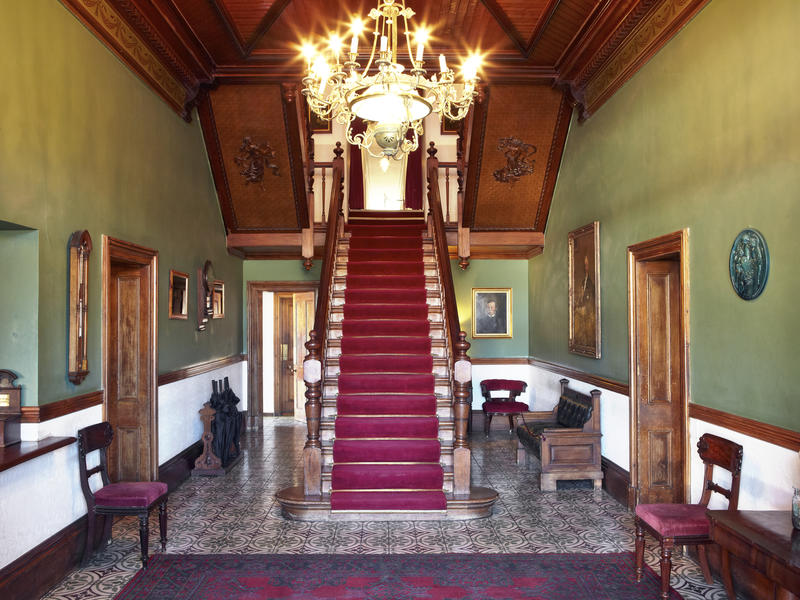 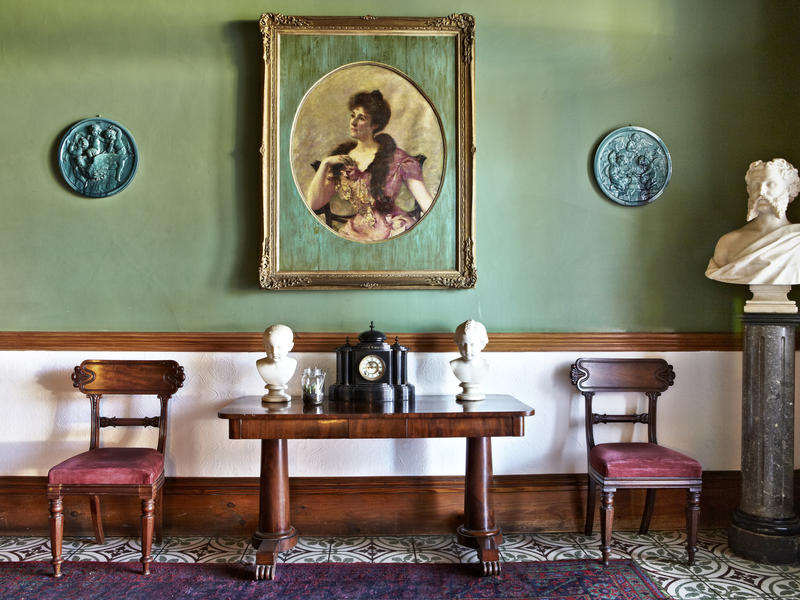 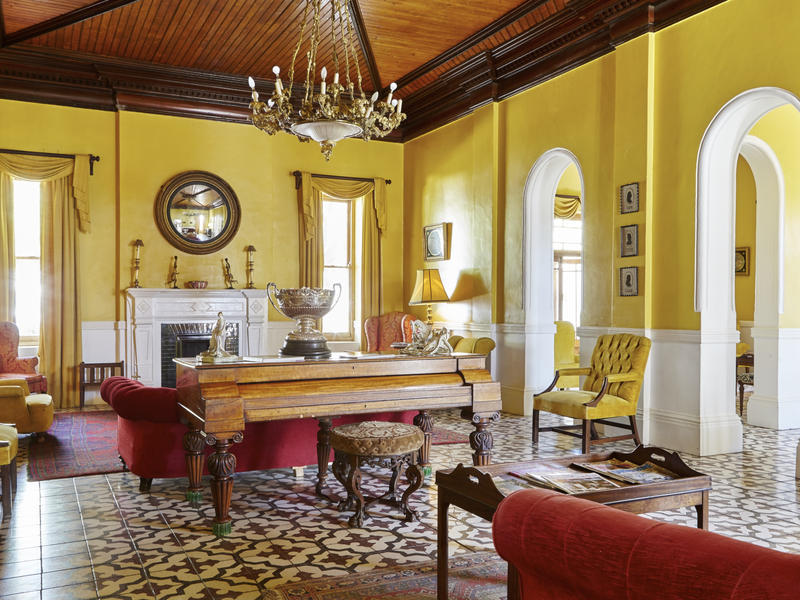 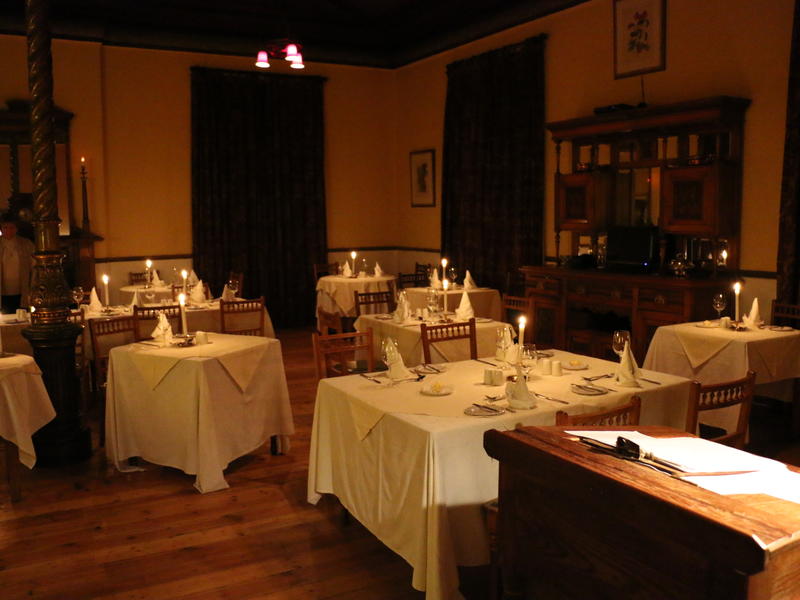 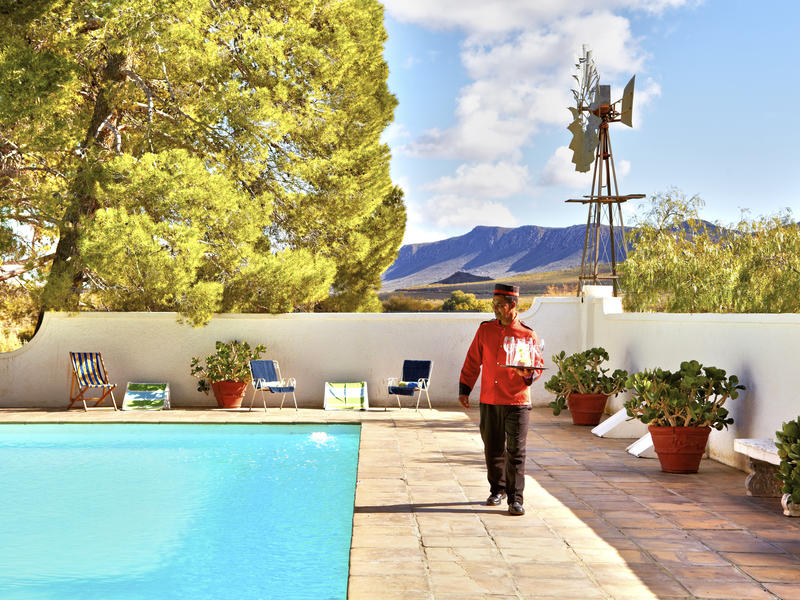 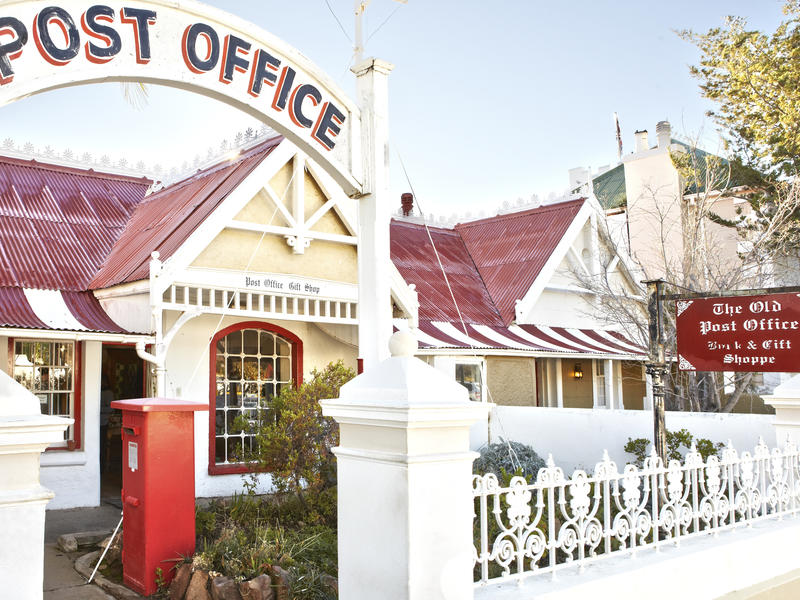 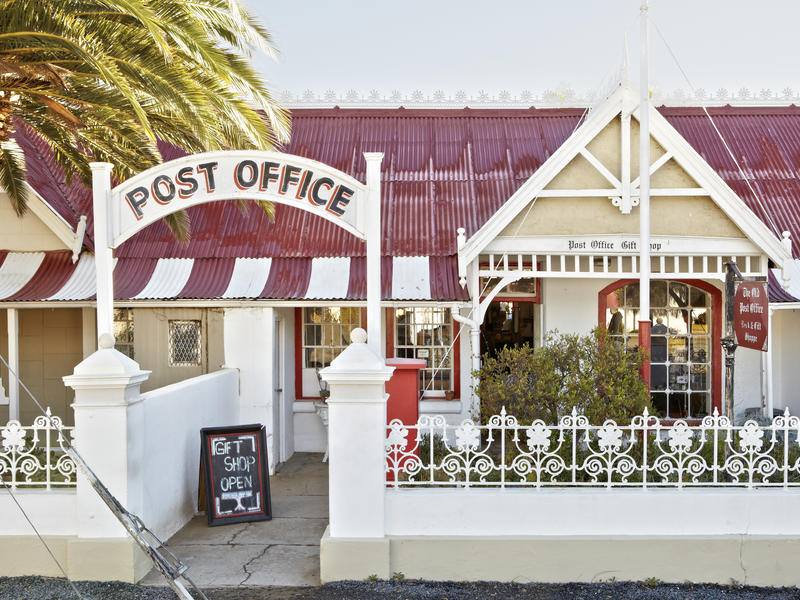 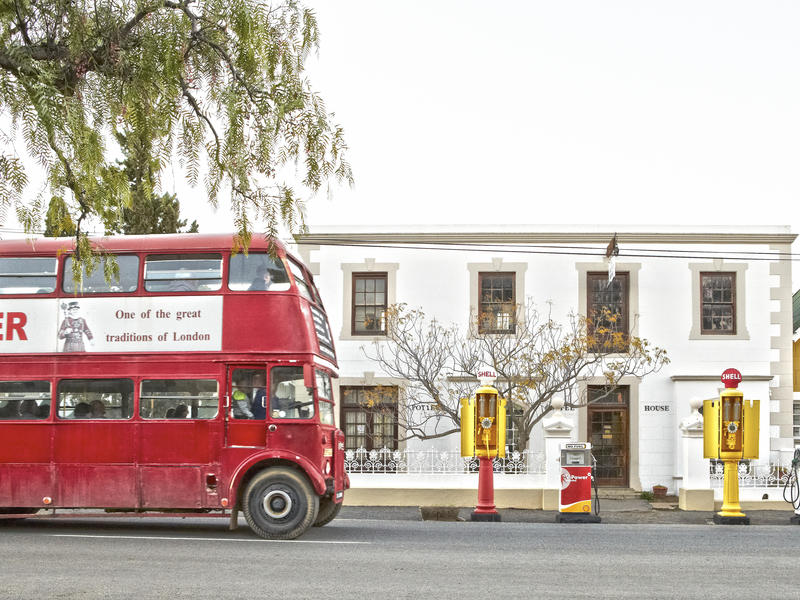 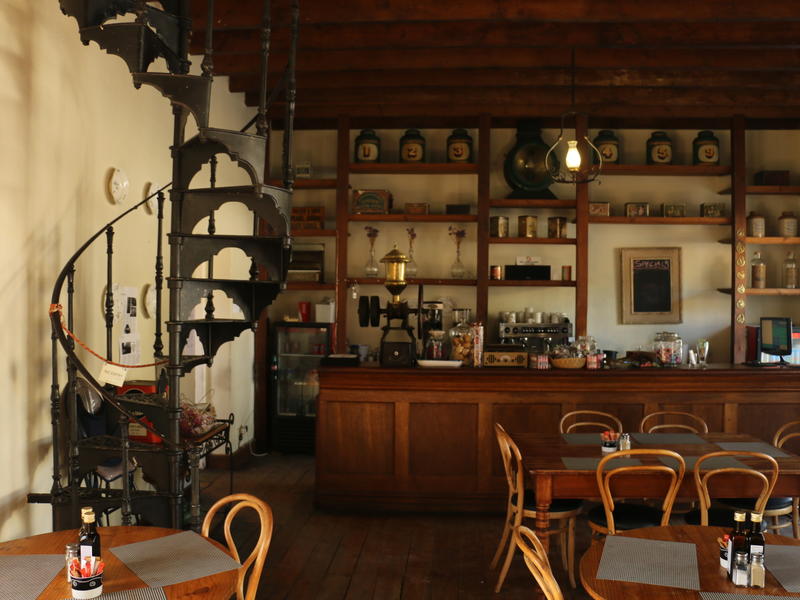 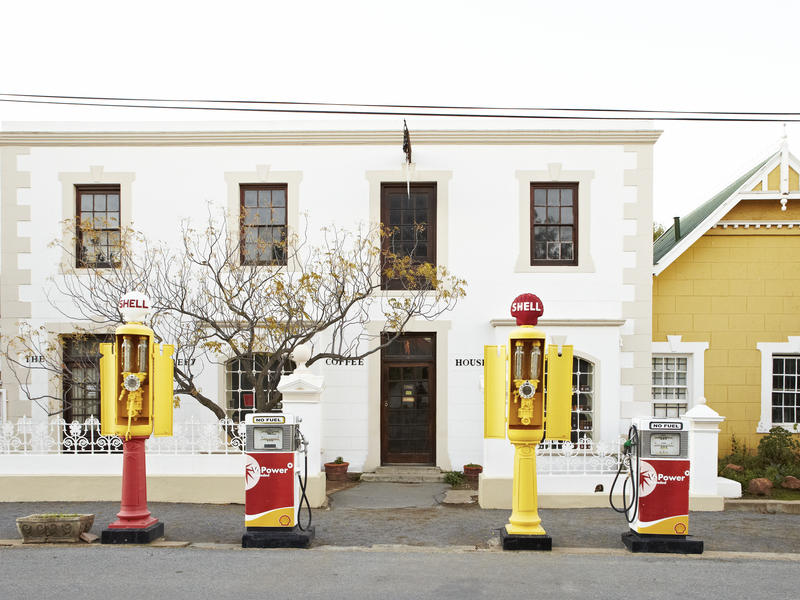 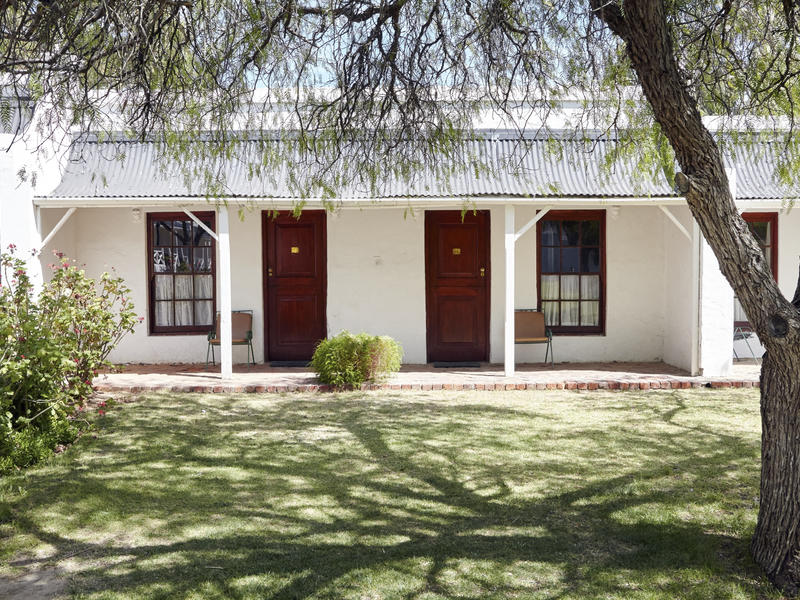 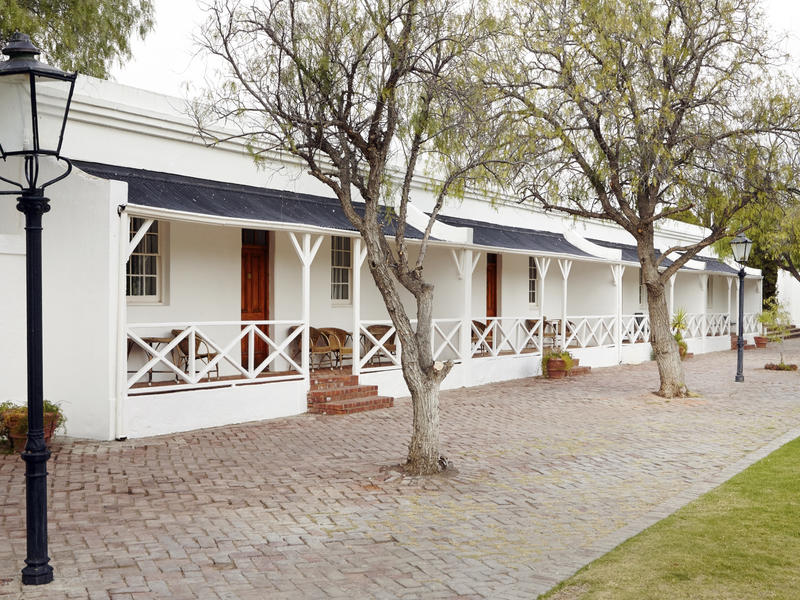 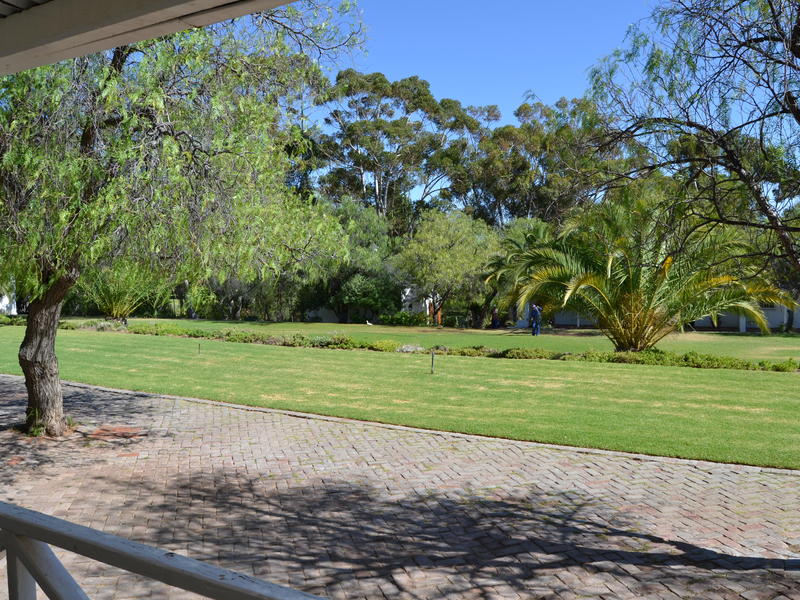 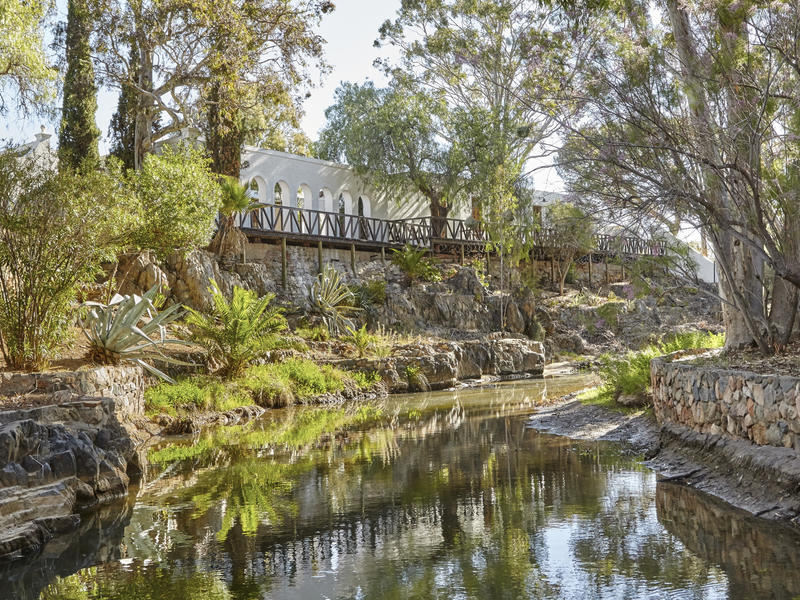 Based at Africas busiest airport, City Lodge Hotel at OR Tambo Airport will provide business and leisure travellers with home away from home accommodation that is…

Overlooking the Victoria and Alfred Waterfront with views of Table Mountain, Robben Island, the Harbour and the Atlantic Ocean is the Commodore, Legacy’s flagship hotel in…

Experience gracious winelands-hospitality in our lovingly restored 1904 Victorian homestead in the heart of Franschhoek – South Africa's Gourment Capital.'Le Ballon Rouge' is one of the…

The Swellengrebel Hotel has a restaurant, outdoor swimming pool, a fitness centre and bar in Swellendam. With a shared lounge, the property also features a garden,…

Located in Riversdale, South Africa, Sleeping Beauty Guesthouse features free Wi-Fi, a garden, and is close to the Spar Supermarket Riversdale. All rooms at this accommodation…

The lodge offers its guests the opportunity to kick-back, relax and enjoy the unspoiled beauty of the Little Karoo, situated 350km from Cape Town and 100km…